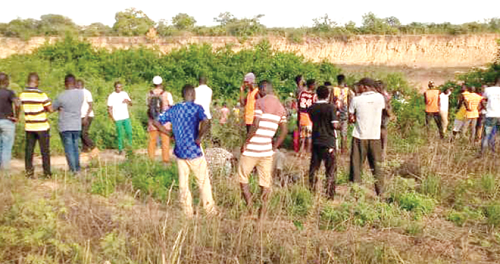 The Headmaster of the St Charles Lwanga Junior High School (JHS) in Saboba in the Northern Region, who has been arrested in connection with the drowning of nine students of the school, will be arraigned in Tamale today on a charge of manslaughter.

The Headmaster, Mr Emmanuel Chinja, 43, was arrested last Saturday and kept in police custody to assist in investigations.

The police said Mr Chinja had sent some 31 students of his school to work on his rice farm, with nine of them getting drowned while they were returning from the farm when one of the two canoes with which they were crossing the River Oti capsized last Friday evening.

Briefing the Daily Graphic, the Saboba District Police Commander, Assistant Superintendent of Police (ASP) Mr Shine Zoiku, said the headmaster handed himself to the police last Saturday after he was declared wanted.

According to him, Chinja went into hiding for fear of his life due to the heightened tension which surrounded the incident, but handed himself to the police for safety a day after the incident.

He indicated that all nine bodies had been retrieved and had since been handed over to their families for burial.

Saboba was thrown into a state of mourning after nine JHS students drowned in the Oti River last Friday afternoon.

The incident is said to have occurred at Buntu, a farming community near Saboba.

The victims were among 31 students of the school who had allegedly gone to work on their headmaster’s farm earlier in the day and who got drowned when they were returning home in batches.

The students had gone to the headmaster’s farm to harvest rice, and when they were returning home, nine of them on board a canoe which they were paddling themselves got drowned.

Following the incident, personnel of the Ghana Police Service and the National Disaster Management Organisation (NADMO), as well as some residents of the area, undertook an operation to retrieve the bodies from the river.