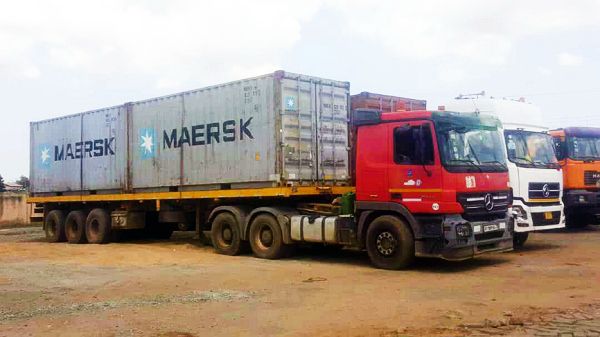 The Counter-intelligence Unit of the Customs Division of the Ghana Revenue Authority (GRA) has intercepted five 20-footer containers loaded with rosewood that was meant for export through the Tema Port.

A surveillance and intelligence team mounted checks at a point near the Afienya Axle Load Station, where it intercepted the consignment, which was on its way from Dambai to Tema.

When the Daily Graphic visited the scene last Tuesday afternoon, there was near confrontation between members of the GRA Special Operations Team and officials of the Economic and Organised Crime Office (EOCO) over who was in charge of the operation.

While officials from the Tema Office of EOCO insisted that the area was under their jurisdiction and, therefore, took custody of the consignment and escorted it to the Tema Regional Police Headquarters, members of the Counter-intelligence Unit of the Customs Division of the GRA, who were accompanied by some military men, maintained that since they had effected the arrest, they had the right to convey the containers to the Customs Office near the Kotoka International Airport (KIA) for the necessary examination, under the supervision of the Forestry Commission (FC).

In the ensuing confusion, an official of the FC, Mr Ben Onuma, arrived on the scene and demanded the permits and licences covering the consignment, but the drivers of the containers failed to produce the documentation on the consignment.

As a result, Mr Onuma instructed the drivers to proceed to the FC offices at Achimota, but the members of the Counter-intelligence Unit declined and insisted that the consignment should rather be sent to the Customs Office near the KIA for the examination.

Earlier in the day, officials at the Afienya Axle Load Station of the Ghana Highway Authority had impounded the two trucks, with registration numbers GT 3226 -11 and GT 7859-14, that were transporting the rosewood because they had exceeded the allowable load limit.

The Head of Security at the Afienya Axle Load Station, Ex-Warrant Officer Musah Atimbilla, explained that per the law, recalcitrant drivers were to pay a fine of GH¢5,500 and also shed off the excess load at the point of arrest.

He said when the trucks arrived at the station, the officials there realised that they were overloaded. When the drivers were questioned, they disclosed that they were carrying large quantities of rosewood lumber.

Meanwhile, the felling and conveyance of rosewood have been banned in the country.

Mr Atimbilla added that upon instructions from his boss, Col Opoku of the National Security, the trucks were impounded and officials of the FC called to inspect the wood.

“When the said officials arrived, I had to release the trucks, on agreement that the fines would be paid on a later date,” he said.