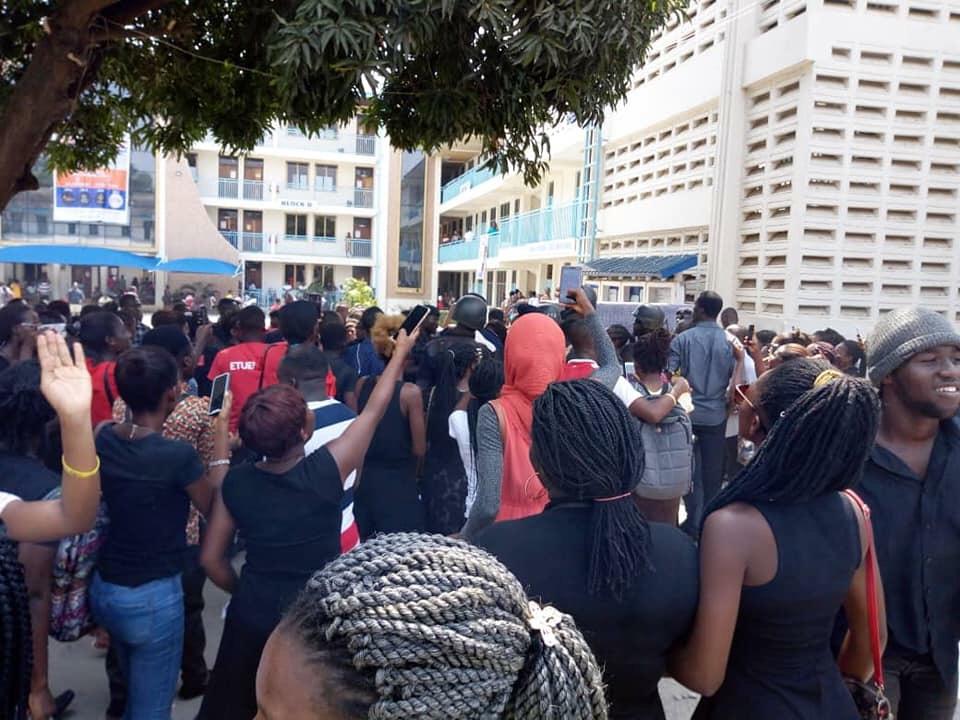 Aggrieved students of the Ghana Institute of Journalism (GIJ) yesterday demonstrated against their school authorities for preventing them from writing end of semester exams because they could not pay Academic Facilities User Fees and register on time.

Some other students, who have paid their fees, also joined the protest in solidarity because of the inability of some of their colleagues to write their exams.

Consequently, personnel from the Ghana Police Service were deployed to the school to maintain law and order as well as calm down tempers of the aggrieved students.

Meanwhile, following the protest the examination scheduled for 1:00pm to 4:00pm yesterday for level 400 and Masters’ students respectively, were cancelled.

As at the time of filing this report yesterday, there was no indication when the examinations will continue.

The aggrieved students have vowed to continue the protest unless they are allowed to write the examinations.

The students said they appealed to the management of the school to allow defaulting students to write the exams and withhold their results.

According to them, management should only release results of the fee owning students when they settle their debt.

When the defaulting students arrived Saturday to write their first papers, they were barred from entering the exam halls.

Again, yesterday, there was no sign that they would be permitted to write the examination.

Many students had genuine concerns over why they had not paid their fees.

They claimed they were either waiting on the scholarship secretariat or the Students Loan Trust Fund to disburse their moneys, which had delayed this semester.

Other students had other concerns which had to do with the school’s registration portal, which they claimed had prevented them from registering.

One final student paid the required fees and registered on the portal.

His name was on the list of students to do project work.

Strangely, on the day of examination, his name was not on the list and when he enquired, he was told that he has to settle GH₵200 debt owed in third year.

He rushed to the bank to pay but was still prevented from writing the examination.

Another student had this to say: “I paid a little over 60 per cent of the fees; GH₵1,600 out of GH₵2,600 amount plus SRC dues GH₵90. With all that, I was unable to register. I came back to the Academic Affairs and they told me they had a challenge with the online portal. So yesterday and today, I was barred from writing my papers and all the Registrar could do was to rain insults on us”.

Fees paid but prevented from writing

Some students, who secured monies on Thursday and Friday, paid their fees and presented the receipts to accounts office but were prevented from writing the examinations on grounds that they have not registered online when the school knew that the portal has been closed.

One other contentious issue is how the inability to pay GH₵50 Students Representative Council (SRC) dues on time attracts additional penalty of GH₵150 before a student is allowed to register.

One student, who was prevented from writing on Saturday, Monalisa Tsiriwaa Brodie-Mends, told the media that the new registration system (student portal) which had been introduced had prevented some students from registering.

“In times past, you go and pay and then go to Academic Affairs, and they key in your details. That is not available anymore. So you have a lot of students who have paid their fees but are unable to register.”

A Level 300 student, who refused to give his name, also made a similar complaint about having tried registering but been scarpered by the school’s registration portal.

Another final year student, who simply gave her name as Ruth, lamented her inability to register on several occasions.

She told The Finder that though she had tried on about six different phones, she was unable to register her courses.

This forced her to go to the academic directorate where she was assured that her issues would be resolved.

She was also given assurance that once it was time for exams, a copy of her receipt would suffice to get her to write her papers.

She was, therefore, surprised when she was denied access to the exam hall on Saturday because she “had not registered.”

One student, Deogracias Gbormitah, a final year student, attributed his inability to pay his fees to the delays in the payment of student loans by the Students Loan Trust Fund.

He said that though he had petitioned school authorities about the delays in payment, he was told that he would not be allowed to write the exams.

True to their words, he was unable to write his paper on Saturday.

News of their friends’ woes, therefore, incensed the greater student body who organised to stage the demonstration on Sunday morning to draw the attention of the school authorities to the unfairness of the situation.

Prior to yesterday’s demonstrations, there had been a durbar between the school’s new Rector and the student body, where some of these issues came up for discussion.