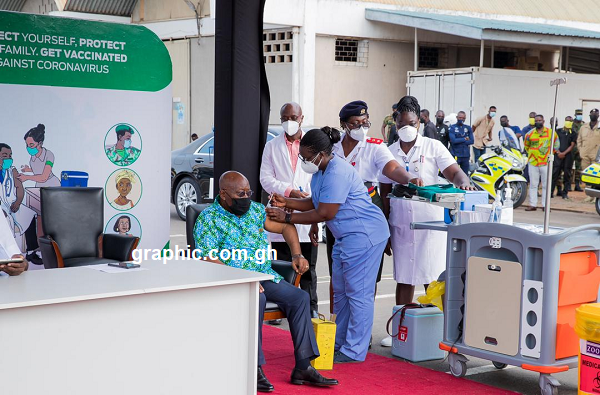 Persons who are eligible for the second shot of the coronavirus (COVID-19) vaccine will have to go to the same centre where they took the first shot for the repeat dose when the exercise begins tomorrow, the Expanded Programme on Immunisation (EPI) of the Ghana Health Service (GHS) has said.

Also, all such persons must ensure that they present the cards they were given when they took the first jab, as the card, which is a form of identity, will facilitate the data needed as well as make it easier to verify persons who actually qualify to receive the second shot.

The Programme Manager of the EPI, Dr Kwame Amponsa-Achiano, in an exclusive interview with the Daily Graphic to explain some concerns raised with regard to the roll out of the second shot, said the list of all those who were qualified for the second dose had been compiled and sent to the various districts where they would be taking the injection.

“For instance, if you took the first shot at Adabraka Polyclinic, you have to return to that same venue because your data has been captured within that district and will need to be verified within that database before taking the jab. If you visit another district or even region, that will be difficult, despite you having the card,” Dr Amponsa-Achiano explained.

Those who will receive the jabs are in the 43 districts in the Greater Accra, Ashanti and Central regions where the first exercise took place.

The nine-day exercise is the third phase of the national vaccination programme against COVID-19.

Although the administration of the second dose was due during the last week of April, the exercise was postponed because of the delay in the arrival of the vaccines as it had become difficult to have orders placed delivered.

However, on May 7, Ghana took delivery of 350,000 doses of the AstraZeneca vaccine at the Kotoka International Airport from the Democratic Republic of Congo under the Covax facility and last Sunday, President Nana Addo Dankwa Akufo-Addo, in his 25th address to update the nation on the COVID-19 situation, announced that the exercise would now take place from May 19 to May 26.

He encouraged all to go for the second shot, saying: “Let us take the vaccine when it gets to our turn.”

The vaccines received are an addition to the 600,000 doses of the AstraZeneca COVID-19 vaccine received on February 24, 2021, and which enabled Ghana to roll out the first round of the shots last March.

Dr Amponsa-Achiano indicated that once a person received the second shot, the card issued during the first jab would be replaced with a new one which has enhanced features such as a QRCode and hologram for easy authentication.

Asked if that card with enhanced features would be internationally accepted if need be, the EPI Programme Manager said for now, no agreement had been reached yet on international cards, but they would serve as a proof of vaccination that would be recognised anywhere.

“Currently, there is no agreement on international cards, though it is envisaged that discussion and agreement will take place at some point.

“For now, the cards to be issued will serve as proof of vaccination. Every country has its card to serve that purpose,” he explained.

Dr Amponsa-Achiano emphasised that as President Akufo-Addo indicated, only people who were vaccinated between March 1 and 9, 2021 should go for the jab as those are the people who were very close to the time frame of maximum 12 weeks to take the second jab.

He explained that to make information easily accessible, some places in the Greater Accra and Greater Kumasi regions had developed infographics that directed people to where they would be taking the jabs.