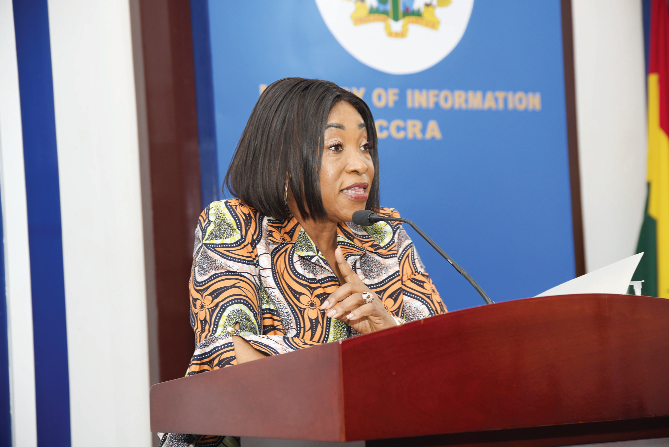 Ghana will, from today, host the Mid-Year Statutory Meetings of the Economic Community of West African States (ECOWAS) in Accra, the Minister of Foreign Affairs and Regional Integration, Ms Shirley Ayorkor Botchwey, has announced.

The meetings will include the 59th ordinary session of the Authority of Heads of State and Government scheduled for June 19.

Ms Ayorkor Botchwey, who made the announcement at a press briefing in Accra yesterday, explained that the meetings were being held following the successful completion of the 29th ordinary session of the Administration and Finance Committee (AFC) of ECOWAS, which was also held in Accra.

The AFC is made up of experts from the ministries of Foreign Affairs and Finance of ECOWAS member states and the outcome of their session, which was held on June 8-12, this year, will inform deliberations at the session of the Council of Ministers on Wednesday and Thursday.

Ms Botchwey intimated that with the exception of Mali, which has been suspended from the sub-regional grouping, all Heads of State and Government of ECOWAS were expected to participate in the summit.

“It is expected that all Heads of State and Government of ECOWAS, with the exception of Mali, will participate in the summit,” she said.

A former President of the Federal Republic of Nigeria and ECOWAS Special Envoy and Mediator for Mali, Dr Goodluck Jonathan, will also participate in the summit.

He is expected to present a report on the current situation in Mali at the summit.

Already, the Foreign Minister said, the President of the ECOWAS Commission, the Vice-President, commissioners and support staff had arrived in Accra ahead of the meetings.

In line with the practice of ECOWAS, Ms Botchwey said, the sessions this week would deliberate on important regional matters germane to the community, including recent political and security developments that threaten the peace and stability of the region.

She said the agenda for the sessions would focus on the progress of institutional reforms in ECOWAS, ECOWAS Vision 2050, the Status of Tasks assigned by the 85th Ordinary Session of the Council of Ministers, the ECOWAS African Research and Innovation Forum (FARI), as well as the humanitarian situation in West Africa.

The Council of Ministers, Ms Botchwey indicated, would also consider and adopt a report of the activities of the ECOWAS Ministers of Trade and Industry and a report of the Ministerial Committee on Single Currency and a New Convergence Pact.

Also up for discussion would be the Regional Flood Risk Initiative Management Strategy and the Gender Strategy and Action Plan for Disaster Reduction, she said.

Ms Botchwey further explained that the deliberations would also be on Ghana’s election to the UN Security Council and the expectation of its role and responsibilities as the representative of the sub-region.

She said the theme chosen for Ghana’s term on the UN Security Council: “Enhancing Global Peace and Security for Sustainable and Inclusive Development”, reflected the vision of ECOWAS to ensure a peaceful and resilient environment for the economic well-being of all our peoples.

It is expected that the summit will afford West African leaders the opportunity to further discuss the response of ECOWAS to Mali’s second coup which has sparked deep concerns over stability in the volatile Sahel region.

Ms Botchwey further indicated that a communique would be issued at the end of proceedings on the decisions reached at the summit.

Ahead of the summit, the Daily Graphic observed yesterday that pavements along ceremonial streets in Accra were being beautified with fresh coat of whitewash paint.

Also, flags of the various member countries had been hoisted along those streets.