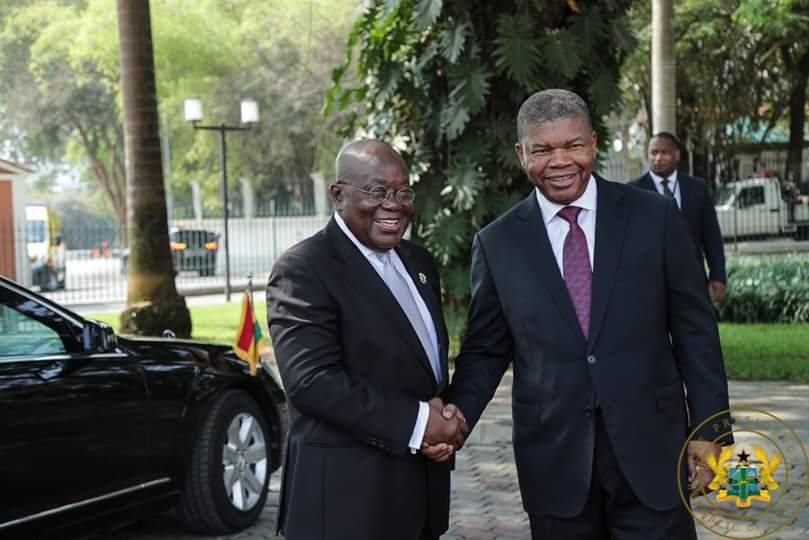 When President Nana Addo Dankwa Akufo-Addo set foot on the tarmac of the Luanda Quatro de Fevereiro International Airport in the Angolan capital on August 8, 2019, it was soon to be recorded as the deepening of another strategic diplomatic ties and the opening of a new chapter for mutually beneficial co-operation between the two states.

The President’s visit, the first by a sitting Ghanaian president, placed relations between the two countries on a new level of co-operation following bilateral discussions with his Angolan counterpart, João Manuel Gonçalves Lourenço.

Discussions between the two heads of state hinged on enhancing the economic, political and people-to-people exchanges, as well as move co-operation between the two countries at the multilateral level. 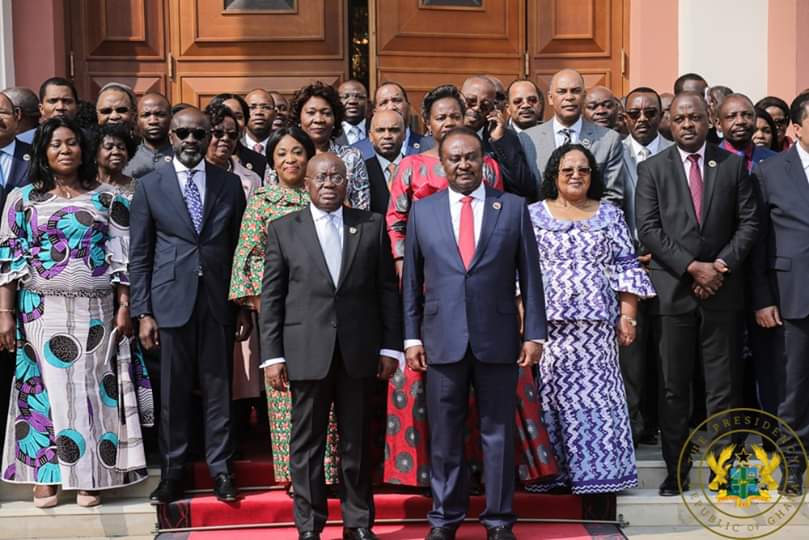 The two leaders resolved to put together synergy for the rapid integration and unification efforts on the continent and also find workable solutions to better the standards of living for their peoples and eradicate poverty on the continent.

President Nana Addo, at a joint press conference during the visit, reiterated the need for the continent to aggressively pursue inter-regional trade if the continent is to realise the goals set under the United Nations Sustainable Development Goals.

He noted further that it was time for African economies to begin adding value to the vast natural resources for rapid economic transformation.

The President was of a firm belief that adding value to Africa’s vast natural resources will offer the continent “the best opportunity to drive maximum benefits from our abundant natural resources…and help bring progress to our people”.

President Nana Addo emphasised further that the drive for socio-economic transformation of the continent must be built on the foundations of strong democratic values, where accountability, respect for human rights and individual liberties feature prominently.

He applauded his Angolan counterpart for the efforts being made to consolidate the process of national reconciliation, burying the devastating past of over two decades of civil war, and nurturing a promising multi-party democracy in Angola.

“The work being done to establish accountability is clearly in the right direction, as it will help drive the important agenda of economic transformation of Angola,” the President noted.

The two countries, after series of bilateral meetings, resolved to enhance co-operation in areas of petroleum and hydrocarbons, immigration, export promotion, education, medical services, hospitality and tourism, fisheries and aquaculture, agriculture, science technology and innovation, aviation and other areas of mutual benefit. 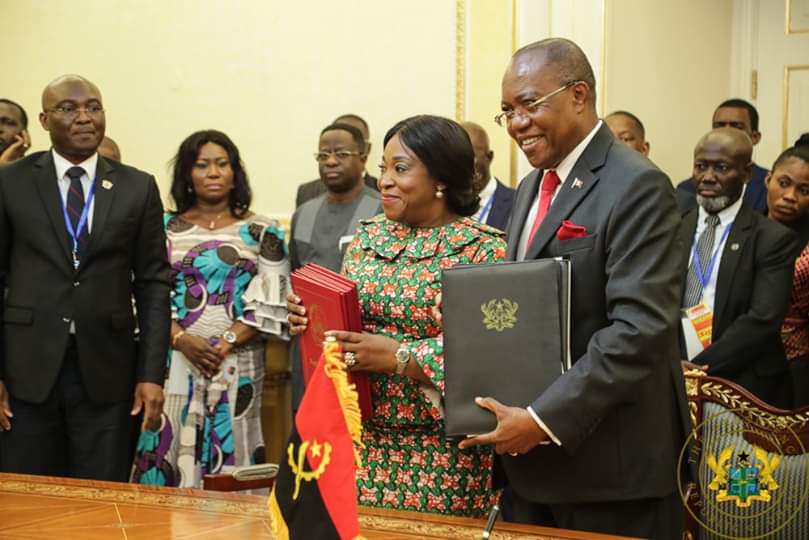 On measures to increase trade and investments between the two countries, both parties agreed to co-operate on market access, facilitate and exchange trade information, participate in each other’s trade fairs and exhibitions, as well as business development activities.

Additionally, the two heads of state made commitments to initiate domestic actions that will boost trade between their countries and other African countries within the context of the African Continental Free Trade Area.

Both countries also made commitments to execute joint programmes in the area of scientific and technical research by respective research institutes to allow common knowledge on fishing in the maritime waters of Angola and Ghana, to improve their exploration and sustainable management.

To advance the potential of oil exploration and production capabilities of Ghana and Angola, the two heads to state also made strong commitments to collaborate to share information and also exchange experiences and expertise in the oil and gas sector.

On the education front, the two countries agreed on an exchange training programme where some 100 Angolan students would have an opportunity to study English in Ghana for a period of six months, and in turn, some Ghanaian tutors would also get to receive training in Angola.

The two countries signed a visa waiver agreement that allows nationals holding valid diplomatic and service passports to travel to either country without visa.

This agreement, which was signed by Ghana’s Minister for Foreign Affairs and Regional Integration, Shirley Ayorkor Botchwey, and the Angolan Minister for External Relations, Manuel Domingos Augusto, waived visa entry for nationals of the two countries holding valid diplomatic and service passports. Holders of these passports can transit or stay in either country for a period not exceeding 90 days from the date of entry without having to obtain a visa.

As a prominent feature of his travels abroad, President Nana Addo met with the Ghanaian community, where he updated them of his developments in Ghana and his government’s programmes at bettering the living conditions of the people.

Key amongst the issues discussed was government’s recent suspension of the agreement with the Power Distribution Services (PDS).

According to the President, that action was necessary so as to protect the assets of the Electricity Company of Ghana (ECG), worth over $3 billion.

President Akufo-Addo said the decision underscores his government’s commitment to run an open and accountable government.

Giving details of the concession agreement, President Nana Addo explained that upon his assumption of office, his government inherited an arrangement in which the United States government, through the Millennium Challenge Corporation (MCC), offered the country half a billion dollars for the reform of the energy sector.

“It was decided to incorporate it largely into the reform of the Electricity Corporation of Ghana. One of the conditions of the money was that we should get a private electricity co-ordinator to partner with the nation to manage our electricity generation and distribution system,” he said.

He, however, noted that government later discovered that some of the financial instruments the company put in place were not in order, which informed the decision to suspend the agreement “until all the facts are established”. 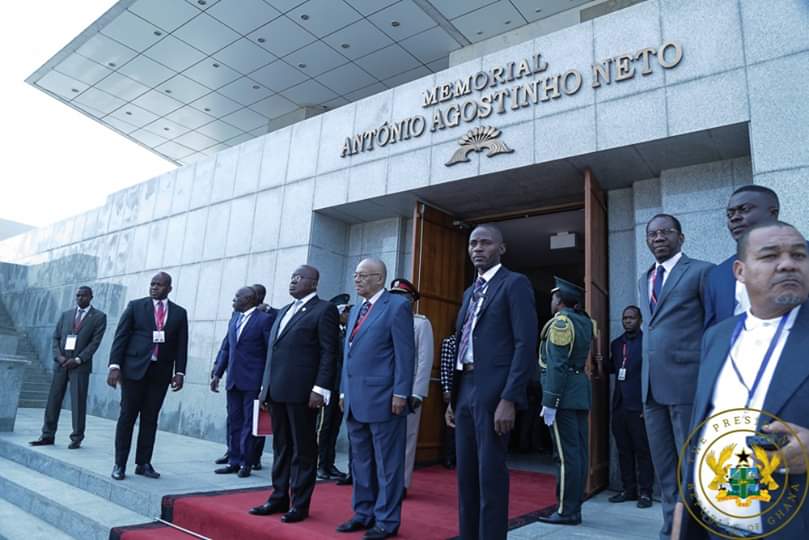 The President explained that a fundamental part of the agreement required that PDS put up a guarantee to cover some $400 million.

“It turned out that there are problems with this guarantee. Therefore, the protection that we should have in the transaction was not really there. The matter came to our notice, and we decided that the first thing to do was to protect the public assets by suspending the agreement with this private sector operator and returning the assets to the control of the ECG whilst a process of investigation was being carried out.”

He, however, assured that the suspension of the agreement with PDS “will not disturb the flow of electricity in the country. Things will continue on a stable basis”.

The Ghanaian community, in turn, requested of the President to help address the cumbersome procedures they go through to get their passports renewed.

The President, in response, assured them of his government’s commitment to help address those challenges.

The President, as part of his visit, laid a wreath at the memorial of Dr António Agostinho Neto, the first President of Angola, and also addressed a special sitting of the National Assembly.

The Angolan President, João Manuel Gonçalves Lourenço, on his part, expressed gratitude to his Ghanaian counterpart for honouring the invitation, and pledged to work together for the mutual benefit of the two states.