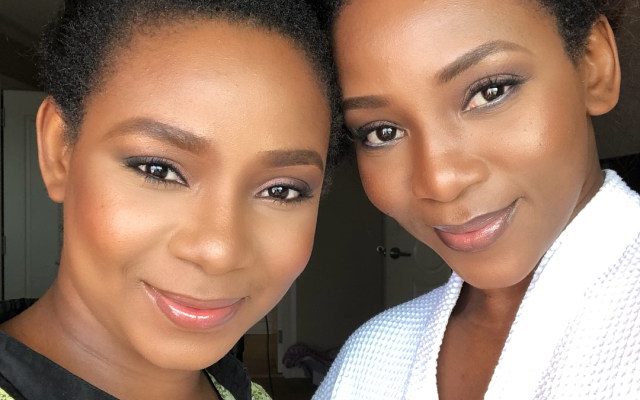 Genevieve Nnaji is a Nigerian actress and singer who has been in the acting scene for a while now. She attended Methodist Girls College (Yaba, Lagos), before transferring into the University of Lagos where she graduated with a bachelor’s degree in creative arts. It is while at the university that she began auditioning for acting jobs in Nollywood.

She won the Africa Movie Academy Award for Best Actress in a Leading Role in 2005, making her the first actress to win the award. In 2011, she was honoured as a Member of the Order of the Federal Republic by the Nigerian government for her contribution to Nollywood.

Nnaji has a daughter by the name Theodora Chimebuka Nnaji. “Dora” as she is fondly referred to, is well protected from the public hence, not much is known about her.

According to the Nollywood actress in an interview, she gave birth to her baby girl at the age of 17. She explained that she didn’t know she was pregnant until her mom discovered it. Since she was from a Catholic family she had to keep the baby as abortion was against their beliefs. After her birth, Chimebuka was raised by her grandmother.

Chimebuka attended the Federal Government College Akure and awarded a university degree from Nnamdi Azikwe University. She finished her NYSC in 2013. She now owns a makeup business known as NAJ Artistry. Through her mother’s influence, she has been in charge of the makeup of many Nigerian celebrities.

Chimebuka’s age is not known as details about her profile have been carefully hidden from the public, but if we take a wild guess considering her mother’s age, Genevieve’s daughter is 22 years old as of 2018.

Genevieve has never revealed who the father of her daughter is. This can be attributed to the controversies surrounding her pregnancy.

Genevieve is not married. However, she had at least revealed the fact that the man of her dreams would be someone who is confident and a best friend of her as well. Although, a lot of times it was rumoured that she had been along with some popular personalities as well as artists that included Ramsey Nouah and D’banj. Tables turned when Genevieve accepted that she didn’t have any plans to settle down with yet another celebrity, the reason being the chaotic lives that the celebrities are leading.

The pictures that were shared by her with a man named AJ Cham who was almost considered to be her brand new husband was in fact not her ‘about to be husband’. This rumour had begun when a few sources claimed that she got secretly married to someone in Portugal. Sshe has successfully kept her love life away from all sorts of controversies.

Genny as she is fondly called started her acting career as a child actress in the then-popular television soap opera “Ripples” at the age of 8. She was also featured in several commercials, some of which included Pronto beverage and Omo detergent. In 1998, at the age of 19, she made her debut in the growing Nigerian film industry with the movie “Most Wanted.” As an upcoming actress, trying to create a niche for herself, she went through various minor roles seeking for that opportunity for a breakthrough.

Her subsequent movies, “Last Party”, “Mark of the Beast” and “Ijele” (which is still considered to be one of her best epic performances to date)–brought forth an icon to be loved and adored by many.

Her name became a household name and her image the desire of every young girl. In 2002, she starred in the movie Sharon Stone, and her fame shot beyond the shores of Nigeria to the rest of Africa and several European countries. One can say that through the buzz, Genevieve reinvented the Nigerian film Industry, introducing Nollywood to the rest of the world.

Genevieve appeals just as warmly to Kenyans, Liberians, South Africans, and Ghanaians, who avidly watch Nigerian home videos at home and abroad. Genevieve has led the market into new territories today. She took the extra step of projecting herself beyond Nigeria by having a Web.