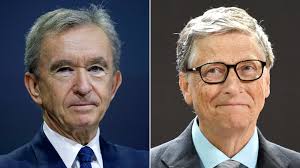 Bernard Arnault is now the world’s second-richest person, according to Forbes’ calculations. The luxury goods titan behind brands such as Louis Vuitton and Moet & Chandon is worth $103.2 billion as of around noon today, up from $76 billion in March when Forbes published our annual billionaire rankings. At the time he was the fourth-richest person on the planet.

His fortune, which hit $100 billion for the first time in June, has been propelled up by record-setting shares of his conglomerate LVMH, which are up just over 50% since the start of the year.

As of Thursday, Arnault is worth $300 million more than Bill Gates, who is now worth $102.9 billion. It’s the first time since 2008 that Gates has not been either the richest or second-richest person in the world. Microsoft shares, too, have been hitting record highs, but they have not kept pace with LVMH. Plus, Gates now holds the majority of his fortune outside of Microsoft. Jeff Bezos remains number one, with a net worth of roughly $124 billion, after subtracting shares of Amazon that will soon belong to his ex-wife, MacKenzie Bezos.

While it seems unlikely that Arnault could catch Bezos, both men have most of their fortunes tied up in their companies’ respective stocks, and another jump by LVMH and dip by Amazon could quickly close the gap. After all, Arnault’s fortune has already grown by $27 billion in the past four months.

To put these gains and his jump in wealth into perspective, consider this: Only five people in the world have officially ranked first or second richest in our annual billionaire rankings since 2001: Bezos, Gates, Warren Buffett, Zara’s Amancio Ortega and Mexico’s telecom titan Carlos Slim Helu.

Behind Arnault’s boom is the fact that high-end buyers continue to pick up luxury goods around the world. LVMH reported record sales and profits of roughly $52.5 billion and $11.2 billion for fiscal year 2018. Sales were up again 16% in the first quarter, to $14 billion. Profits, which are reported semiannually, will be announced in late July.

But Arnault is not complacent. He continues to innovate and refresh LVMH 35 years after he got into luxury goods with the purchase of Christian Dior. Just this week he announced a venture with fashion designer Stella McCartney. The move comes roughly 16 months after McCartney left LVMH rival Kering (run by Francois-Henri Pinault, son of French billionaire Francois Pinault) and took full ownership of her company. McCartney said in LVMH’s press release that since then a number of parties approached her about partnering but that she was won over by Arnault and his son Antoine.

The aim of the partnership is not only to grow the Stella McCartney House but also to expand LVMH’s sustainability efforts. McCartney, whose brand is known for its commitment to sustainable and ethical luxury fashion, will serve as a special advisor to LVMH on sustainability.

“I am extremely happy with this partnership with Stella. It is the beginning of a beautiful story together, and we are convinced of the great long-term potential of her House,” Arnault said in the press release. “A decisive factor was that she was the first to put sustainability and ethical issues on the front stage, very early on, and built her House around these issues. It emphasizes LVMH Groups’ commitment to sustainability.”

That deal follows the luxury group’s two highly touted partnerships with superstar singer Rihanna—Fenty Beauty and Fenty fashion house—as well as recent deals such as the acquisition of Belmond, which operates luxury hotels, trains and even safaris.