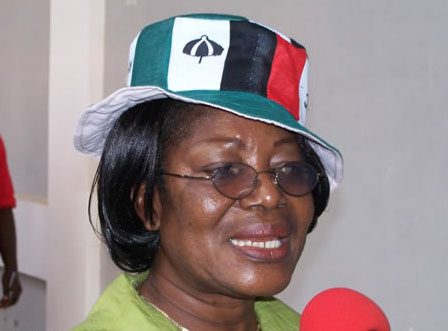 Former Central Regional Minister in the erstwhile National Democratic Congress (NDC) administration, Ama Benyiwa Doe who had gone into political oblivion seems to have found her voice after the party’s national delegate’s conference and is optimistic of the party returning to political power in 2020.

She is banking her optimism on the implementation of the Free Senior High School policy by the current New Patriotic Party (NPP) administration, saying the policy is unpopular and will be the basis for the Nana Akufo-Addo led government to lose power to the NDC in the next general elections.

‘’The government does not even have a policy document for the Free SHS and it is clear the quality in the system is missing. They have done things regarding this policy in a haphazard manner and those who are supposed to benefit from it are crying that it is not good. That one alone will deliver victory to us in 2020’’ she said.

She said the Free SHS policy was not well thought out, planned and costed, hence the challenges, leading to the introduction of the Double-Track system.

On the building of the National Cathedral, the once vociferous National Women’s Organiser of the NDC said it was a misplaced priority, saying government should be fixated at spending the money on the education sector to ensure that the challenges there are fixed, rather than spend it a national cathedral which according to her will not benefit the generality of the Ghanaian people.

‘’You are going to build a national cathedral because someone else has built one somewhere and so at all cost you want to build it so that when you are no longer there one day, then they will say it was Akufo-Addo who built it, no, it is a misplaced priority. The seed money should be used for something else rather than the national cathedral’’ she added.