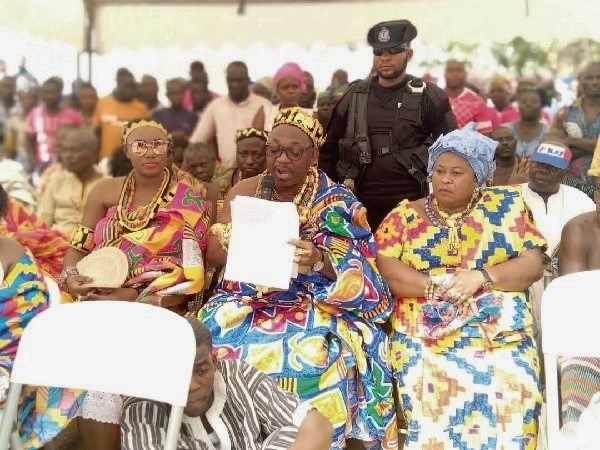 The Paramount Chief of the Nyagbo Traditional Area, Torgbui Ashui Nyagasi V (known in judicial circles as Justice Clemence Honyenuga), the judge sitting on the case between the state, on the one hand; and the former CEO of the Ghana Cocoa Board (COCOBOD), Dr Stephen Opuni and businessman Seidu Agongo, has told President Nana Akufo-Addo that his government’s Free Senior High School policy is unparalleled.

Speaking at a durbar of chiefs and people of Golokwati, Afadzato South, in honour of Mr Akufo-Addo during his three-day tour of the Oti and Volta regions last week, Torgbui Ashui Nyagasi V told the President: “We wish to congratulate you for the excellent manner you are governing this dear country of ours, Ghana, and the significant gains made in the economy in your first term”, adding: “It is true that you have won high admiration, not only in Africa but also in advanced democracies”.

“Indeed”, he added: “For special mention is the Free SHS, which has broken boundaries and has greatly bridged the gap between the rich and the poor”, observing: “This programme has also broken the record, which was held by the first President of the Republic of Ghana, Dr Kwame Nkrumah, who gave free education to our brothers and sisters in the northern part of Ghana”.

The chief then praised the President thus: “Your Free SHS programme is unprecedented in the history of Ghana, in a first term, as it covers the whole country”.

“We, in this district, have equally benefitted and we say ‘ayekoo’ to Your Excellency and may God and our ancestors shower their blessings on you, give you longer life and deeper thoughts to move this nation forward”.

“It is our hope that with your vision and the gains made in your first term, Ghanaians may consider giving you another four years”.

President Nana Akufo-Addo fulfilled his Free SHS campaign promise in the first year of his first term in 2017. Since then, the government says up to 1.2 million students have been enrolled.