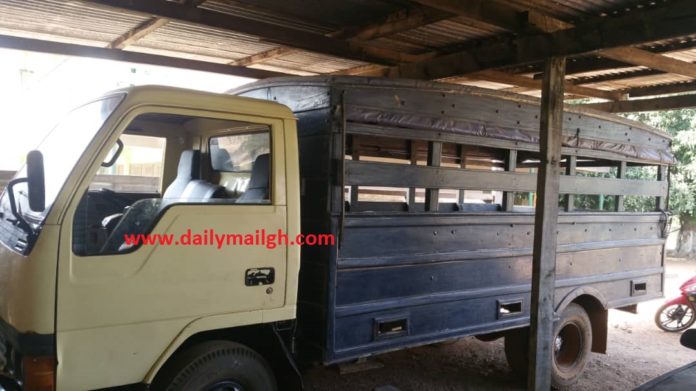 It has emerged that the vehicle belonging to the Wa School for the Deaf has been “mysteriously returned” to the school, Dailymailgh.com can confirm.

It still remains unclear how the said vehicle resurfaced following reports that it had been auctioned by the Upper West Regional Director of Education, Mr Duncan Nsor, without following due process.

This sparked public outrage amid threats by the federation of persons with disability in the region to demonstrate against the interdicted officer.

Upper West Regional Correspondent Sungumo Dauda Ibrahim who visited the school on Monday reports that the truck had been impounded and had since been driven to the school.

“So the information is that as it stands now nobody knows who drove the truck to the school compound though the headmaster was yet to be informed at the time I visited”, reported Ibrahim

Several inscriptions bearing the name of the school had been wiped off, a clear indication that the vehicle was already gone,  Ibrahim further narrated.

Authorities at the school were not readily available to comment on the development.

Mr. Nsor was asked to step aside over allegations of misconduct and corrupt practices.

A full scale investigations into allegations of bribery in the appointment of heads of some second-cycle schools in the region is yet to begin.

Circumstances surrounding the auctioning of a track belonging to Wa School for the Deaf, which vehicle at the time of the auctioning was under his care and his refusal to inform the school and the Director-General of the development.

Allegations of bribery in the appointment of some Heads of some second cycle schools in the Region.

Alleged deduction of monies from some allowances due to some teachers in the region.

Meanwhile, the GES says he should be prepared to appear before an Investigation Committee for a probe.