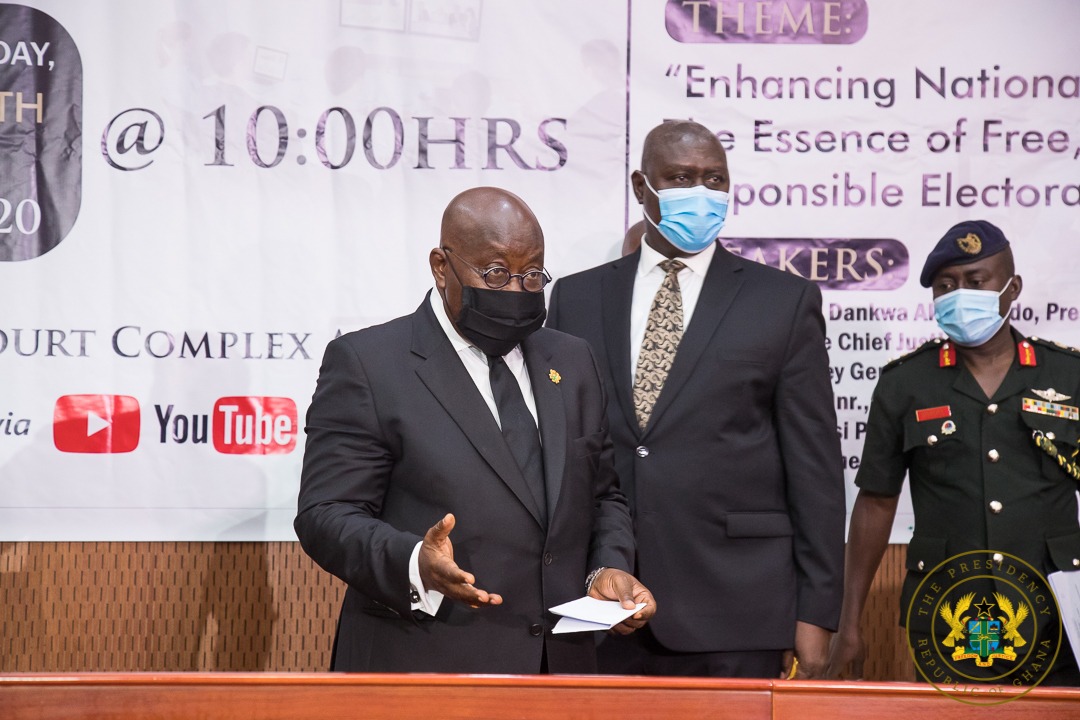 The President of the Republic, Nana Addo Dankwa Akufo-Addo, says the conduct of a free, fair, and transparent election, one whose result is beyond dispute, forms a good basis for strengthening cohesion amongst the Ghanaian citizenry, and preventing needless disputations.

Speaking at the Annual Conference of the Ghana Bar Association, albeit through virtual means, on Monday, 14th September 2020, President Akufo-Addo explained that from 1992 to date, the conduct of the country’s elections has evolved significantly.

According to President Akufo-Addo, the current multiplicity of media organisations and the power of social media, the existence of transparent ballot boxes, the decentralized nature of tallying and tabulation, and the mode of voter verification has engendered increasing trust and confidence by the citizenry in the process of electing their leaders.

Together with the compilation of a new voters’ register, ahead the conduct of the December 2020 elections, the President explained that “all of these enhanced processes have strengthened the cohesion of the nation. They have also repudiated as fallacious the contentions expressed at various times of our history that democratic governance would breed instability and ethnic conflict.”

He continued, “There have actually been those who went as far as to state that democracy was inherently alien to our culture and social make-up. The continuing success of the 4th Republic provides the most effective response to this unfortunate viewpoint.”

With electoral disputes wreaking havoc in some African countries, President Akufo-Addo stated that Ghana has been spared such incidents, adding that “we have the good sense of the Ghanaian people to thank for this, and we must continue to act as checks and balances for one another.”

Nonetheless, the President noted that Ghanaians cannot and must not take this good fortune for granted, urging all candidates, voters and citizens to conduct “ourselves in a manner that keeps us together as one people, irrespective of our ethnic, religious, gender or political differences and affiliations. The Ghana Project cannot afford ethnic agitations and sectarian pronouncements.”

The President was of the belief that the pressing challenge for Ghana is negotiating satisfactorily the interface between elections and democratic governance, institution-building and development, poverty, jobs and economic growth, with the overriding objective being to enrich the dignity of the Ghanaian.

“There are many examples of countries around the world where that stable period of constitutional government and intelligent management of the economy led to general prosperity. We, in Ghana, can profitably emulate them, for we can make it, if we work at it,” he added.

President Akufo-Addo expressed his delight at the fact that “the political class and stakeholders have agreed upon the necessity, in the face of the pandemic, to hold the December general elections as scheduled to bolster the evolution of our constitutional order, and maintain the culture where executive and legislative authority are exercised in the 4th Republic only by duly elected officials. Ghanaian democracy will be the stronger for that shared commitment.”

He reassured Members of the Bar Association that his Government is making unstinting efforts to ensure the peace and stability of the nation, as Ghana enters the last three (3) months of the electioneering campaign.

“Ghana has rightly earned a reputation as the pacesetter in democratic governance on the continent, a reputation I am determined to uphold, and, indeed, enhance prior to, during and after the 7th December elections,” the President assured.

To this end, he appealed for the co-operation and assistance of all citizens, especially members of the Bar Association, stating that “we have all to work together to create the environment that will allow the Ghanaian people to make their decision on 7th December in freedom, peace and security. It is their right.”

In concluding, the President added that “when my time is up, hopefully, after four more years, I want to hand over to my successor and the sovereign people of Ghana, a country that is greater, fairer, stronger, more cohesive, more prosperous and more united than I met it in 2017. This is the solemn undertaking to which I have committed myself.”