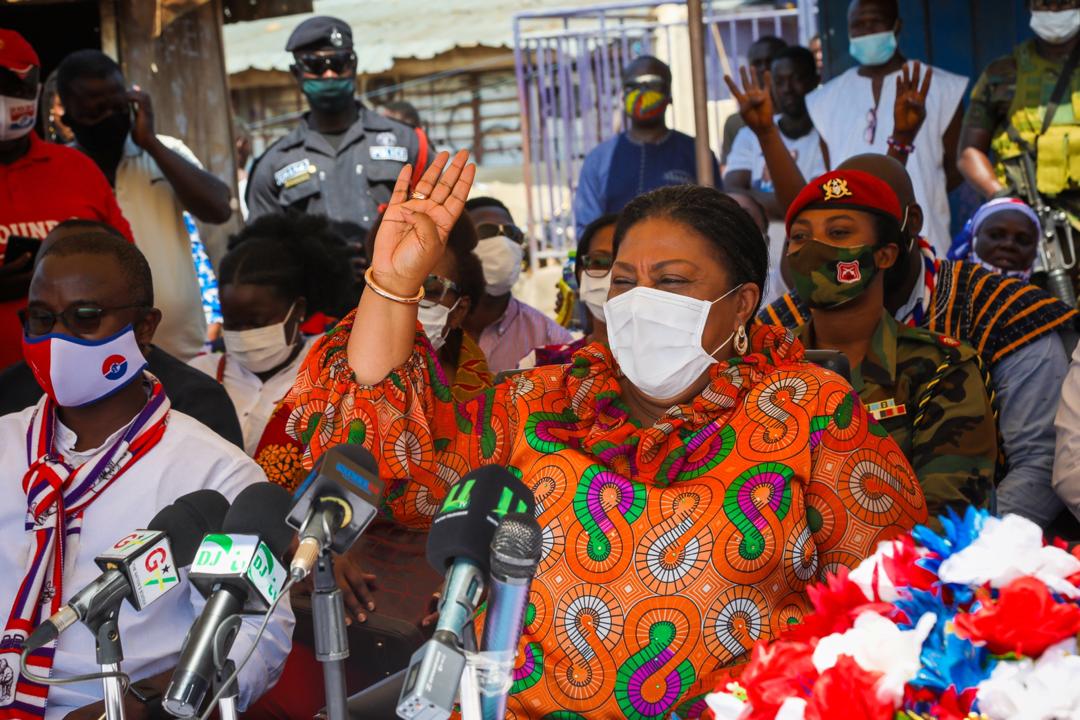 The First Lady of the Republic H.E. Mrs. Rebecca Naa Okaikor Akufo-Addo has toured some parts of the Greater Accra Region, taking her to Achimota and Akweteman, both in the Okaikoi North Constituency.

Mrs. Akufo-Addo first paid a courtesy call on the Chief of Achimota, Nii Adams Ayi Bonte at his palace where she held brief interactions with the chief and his elders.

The First lady expressed her gratitude to Nii Ayi Bonte for the support he has extended to her husband and President of the Republic, H.E. Nana Addo Dankwa Akufo-Addo.
She said while there was still more to be done she was positive that the good works of President Akufo-Addo will encourage the good people of Achimota to vote for him to do more.

Mrs. Akufo-Addo said the government of President Akufo-Addo since assuming office in 2017 has implemented several policies and programmes which have created many jobs for the youth.

She said the implementation of NABCO, 1D1F and the recruitment of teachers, health workers and agric extension officers among others have impacted positively on the youth.
Mrs. Akufo-Addo explained that the ability of the Akufo-Addo government to employ all these youth was as a result of sound economic management which will be continued when the President is given the mandate for four more years.

Mrs. Akufo-Addo said The Rebecca Foundation has also been complementing government’s efforts at improving education, by initiating programmes such as “Learning to Read, Reading to learn” and putting up libraries in various communities across the country to provide children with conducive reading environment, to acquire knowledge.

The First lady also met with market women at the Achimota Market where the market women told the First Lady about fulfilment of certain promises she made to them in 2016.

Mrs. Akufo-Addo’s next point of call was on the palace of the Chief of Akweteman, Nii Akwete Brenya III where she met with the chief and his elders.

She urged the Chief and elders of Akweteman to continue to support President Akufo-Addo by voting for him in the December 2020 Presidential elections, to continue with his good work.

The First Lady next visited market women at Nii Boiman New Market where a mini durbar was held in her honour. She thanked them for the honour done her and expressed satisfaction at the construction of the new market, which she said will enhance patronage. She also thanked them for their support for the President and the NPP government.

On behalf of the market women of Nii Boiman Market (Market Queen) thanked the First Lady for honouring them with her visit and promised to work hard to rally support for President Akufo-Addo and the NPP government to win the December election.