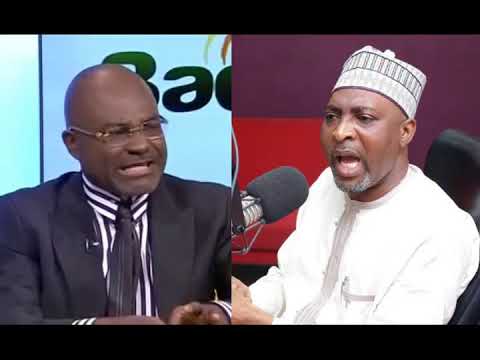 The Assin Central MP is said to have confronted his Asawase counterpart over a motion he raised on the floor of the house yesterday, Tuesday, 30th January, 2019 demanding that Mr. Agyapong be dragged before the privileges committee to answer for his role in the murder of slain lead undercover investigator for Tiger Eye PI, Ahmed Hussein-Suale.

Mr. Mubarak accused Mr. Agyapong of complicity in the murder for exposing the identity of Mr. Suale on his privately owned Television station, Net 2 TV.

This did not go down well with the vociferous MP who confronted Mr. Mubarak on the floor shortly before the business for the day started.

The two were seen exchanging insults and threatening to deal with each other.

Mr. Agyapong called Mr. Mubarak a fool, an animal and a thief who was sacked as Minister for stealing public funds, saying he will face him squarely and that the fight had just began.

Mr. Mubarak was also heard yelling at the top of his voice saying he will teach Mr. Agyapong lesson for calling him an animal.

The leadership of Parliament has not responded to the brawl yet.