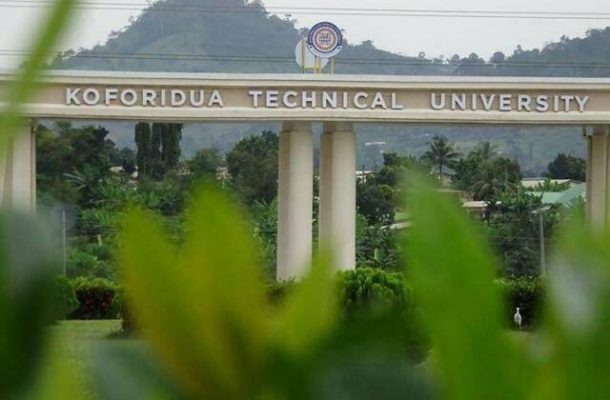 The family of Olivia Sakyi, a level 200 student of Koforidua Technical University, who died under unexplained circumstances, is demanding a thorough investigation into the matter.

The student passed away at the emergency unit of the Eastern Regional Hospital, Koforidua, on Monday, May 13, 2019.

According to Mr Sarkodie Asante, an uncle of the deceased, he visited the school on Tuesday after the death of his niece to get answers, but school authorities declined to speak to him.

He said the case has since been reported to the Koforidua Central Police Station.

Mr Asante explained that the biological parents of the deceased student, who was studying Hospitality and Management Studies at Koforidua Technical University, are outside the country, leaving her in his care.

The family is awaiting autopsy report.

When The Finder contacted the Dean of Students of Koforidua Technical University, Mr Samuel Ayittah, he debunked accusations that negligence led to the death of Olivia Sakyi.

He explained it could not be that a sick student admitted at the school clinic could be abandoned to die as claimed by some reports.

He stressed that if that had happened, he would have been the one to take the school on.

Olivia Sakyi took ill while taking part in the end-of-semester examination on Monday.

Mr Frank Frempong Ofosu, the invigilator at the hall, said the young lady asked permission to use the washroom around 11am, which was close to the end of the paper.

Mr Ofosu disclosed that Olivia returned from the washroom minutes later showing signs of a person not feeling well.

“I looked at her face and said, ‘Ah! What is wrong? She said, Oh! I’m not feeling well.’ So immediately I said to the security man, if she is not feeling well, she can’t be in the hall so take her to the clinic. The security man took her there and five minutes later I followed up,” he said.

The invigilator explained that when he got to the clinic, Olivia Sakyi was in the consulting room, and in order not to disturb them, he went back to the examination hall, picked her script and took it to the clinic.

“I told them to keep the papers so that if she is stable and can write, fair enough. I’m attending to the other students. So I went on to continue my invigilation,” he added.

Mr Ofosu said that the examination ended in about 15 minutes. Therefore, he and a colleague went back to the clinic to collect Olivia Sakyi’s paper, as well as find out if she was okay.

“She was in a good mood and we had a chat. And then I took my papers to the examination centre and reported to the examination officer there that one of the students was not feeling well and is at the sick bay so in case of anything she could go there and check,” he added.

Mr Ofosu revealed that he later went back to the school clinic to check on the lady only to be told that her condition had worsened and had been rushed to the regional hospital.

According to Mrs Akomea, the patient said she was aware of her blood pressure issue and was asked to check it on a regular basis at the clinic.

“She never showed up until Monday. She was complaining of chest pains. She was coughing so I asked her, ‘Have you taken any drug in the past one week’.

“She said yes. She went to the pharmacy to buy Vicks cough. And then they gave her analgesic, she couldn’t remember the name.

“She just said it was a pain relief. So I asked her, ‘Now that you are writing exams and I need to refer you, what should we do?’” the nurse added.

Mrs Akomea said Olivia answered by saying she had one more question to answer.

She then asked her to take a rest and monitored her pressure after 30 minutes.

She realised the pressure had dropped from 170 to 168. The nurse said she then allowed her to continue with her examinations at the clinic.

According to the nurse, upon checking for the third time, she realised the condition was not getting any better and decided to transfer her to the regional hospital.

She claimed Olivia was hesitant on the basis that her National Health Insurance card had expired.

Mrs Akomea said she persuaded Olivia to go regardless of the insurance problem, but Olivia insisted on going to her hostel.

The nurse said one final year student by name Eric Coffie was then called on to help Olivia into a taxi to transport her to the hospital.

According to Coffie, Olivia threw up several times in the taxi on their way to the hospital and eventually suffered a seizure, saying, “When we reached town she started vomiting on me.

“After the vomiting, she became weak and foam was coming from her mouth and she was behaving like someone who had epilepsy,” he added.

Olivia passed away at the hospital minutes upon arrival at the emergency room. Her body has since been deposited at the morgue.