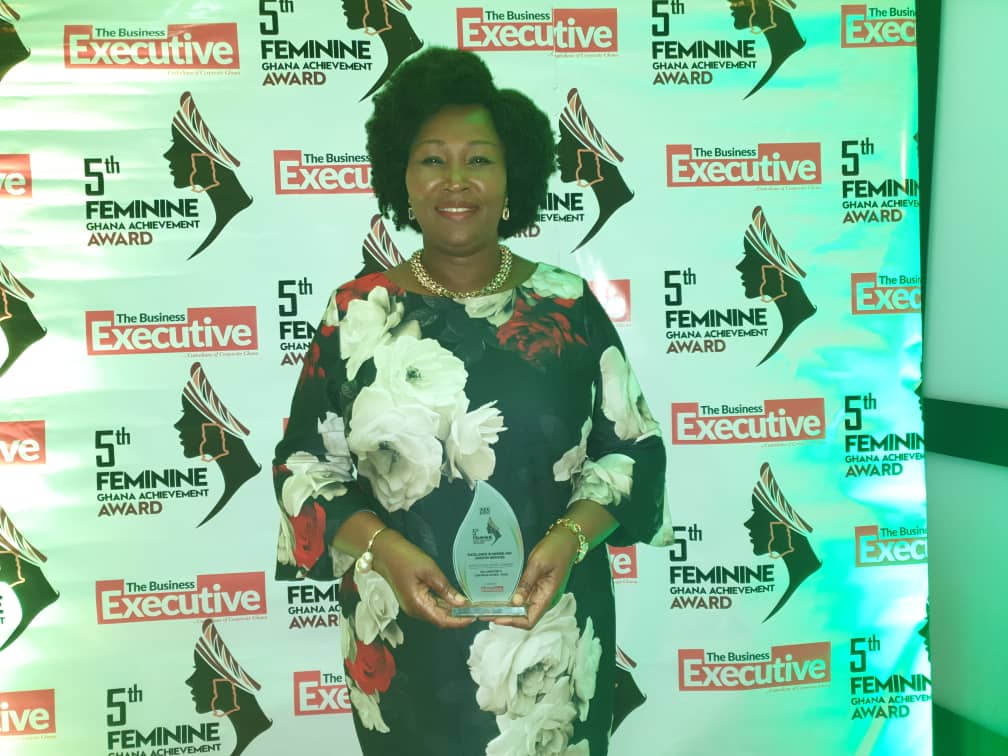 The General Manager, Marketing and Corporate Affairs of the Ghana Ports and Harbours Authority (GPHA), Mrs. Esther Gyebi Donkor has been bestowed the Excellence in Marine and Aviation award at the 5th Feminine Ghana Achievement Awards held in Accra.

Esther Gyebi Donkor was awarded due to her high expression of commitment to serve the Ghana Ports and Harbours Authority and the maritime industry.

She has played key roles in driving reforms at the Ports of Ghana.

Mrs. Gyebi-Donkor’s personal motivation and hard work has successfully placed her as a leading female light in the Port Industry in Ghana. One of the most critical and visible achievements of her career was when she was appointed the leader of the GPHA Team to implement the Vice President’s directive on the paperless regime at the ports, a charge she led and achieved within two months.

Mrs. Gyebi Donkor has worked in the port industry for 25years and she happens to be the first female Terminal Manager. She was the Manager for Terminal One from January 2013 to 2014 where she managed the area inside the Port apart from the MPS Concession. It is a multi-purpose Terminal which offers a combined and flexible response to the servicing demand of various types of vessels and cargo.

Between the period of January 2015 to May 2017, Mrs. Gyebi-Donkor was the Terminal Manager of Golden Jubilee Group of Terminals which comprised of Golden Jubilee Terminal, GPHA Reefer Terminal and GPHA Transit Terminal where she planned, received, stored and delivered cargo quickly, safely and cost-effectively to the owners.

She was able to create a convenient environment for customers whose satisfaction she made a priority.

Under her leadership, the Golden Jubilee Terminal exceeded containers delivered target of 74,216 TEUs by 30% for and also exceeded Reefer Container delivery target of 11, 130 TEUs by 124%.

Transit trade also exceeded the 1 million TEUs target for the first time in 2017 after the drastic reduction in 2009 under her leadership as the General manager, Marketing and Corporate Affairs who is also in charge of the Transit Trade through the Ports of Ghana.

Mrs. Gyebi-Donkor earned the Ports of Ghana extra revenue by instituting charges for some services which were hitherto erroneously rendered for free in the Yam and Transshipment Operation.

She has served as the President of the Network for professional Women in the Maritime and Port Sectors of West and Central Africa from February 2013 to October 2017 and also served as President of Port Ladies Association of Ghana Ports & Harbours Authority from 1998 to 2004.

She was the GPHA representative on the Board of the Ghana Maritime Authority from 2017 to March 2019.

The Feminine Ghana Achievement Award is an annual woman empowerment program, set aside to recognize outstanding Ghanaian women who are leading exemplary roles in their professional and personal conducts in society.

Speaking after receiving the award, Mrs. Gyebi-Donkor said the award is an encouragement and will motivate her to work hard to achieve higher laurels.

“It’s a privilege for me to be spotted and recognized and I feel very honoured especially when the port industry is a male dominated one and the few women in the industry will have to work exceptionally hard to be noticed,” she said.

She encouraged young women in the port and maritime industry to avail themselves to take up challenging tasks and also ensure that they go through relevant training to acquire the needed skills in their areas of endeavour.

She attributed the award to the hardworking staff she works with as well as her family.

“I will also not leave out my husband, my children and my mom. They have been very supportive considering the odd hours I needed to work in the office and outside the office,” she said.

She also indicated that she owes a debt of gratitude to the management of the Port Authority for having confidence in her and entrusting her with core positions, and also the exposure through trainings, seminars and workshops.