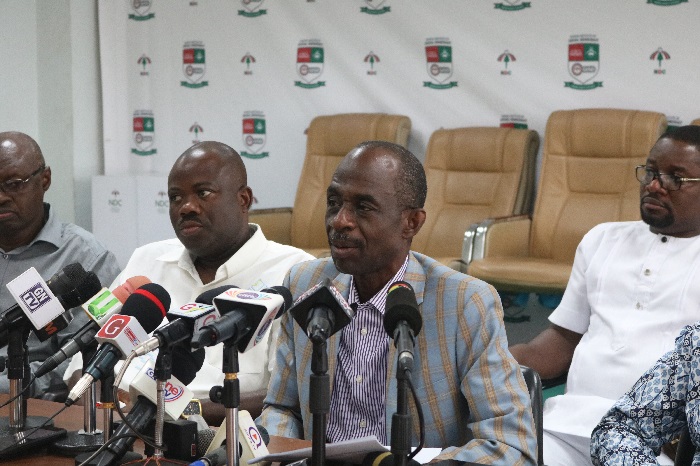 The National Democratic Congress (NDC) has officially launched an e-payment platform to facilitate its fundraising activities.

The new electronic platform, including an application interface dubbed: “NDC GHANA”, a website, www.ghanandc.com and a short code, *216# or *714*24# will be for special contributions and dues collection among its members.

Mr Johnson Asiedu Nketia, the General Secretary of the NDC, speaking at the launch on Monday, in Accra, described the initiative as an efficient system of collecting dues from Party members.

He also noted that the focus was on Party dues, however, they would subsequently computerise donations and other contributions into the Party’s coffers.

He noted that if all funds were computerised, this would help provide transparency and more means of holding the Party’s leadership accountable.

Mr Nketia said this was a journey towards making the party collectively owned by all, adding that, “if you do not want to contribute your dues, then you are compromising your right to participate in decision making”.

He explained that if Party members allowed a few well to do people to be responsible for the funding of the Party, they would want their voice heard, loudest.

The General Secretary also pointed out that the cost of seeking political office in Ghana was very high and rising; therefore, the need to think through and find innovative solutions towards reducing or bringing the cost down.

Mr Nketia said in the absence of such initiatives within the political system, contestants were made to take the full cost during primaries, since parties could not bear the cost.

Mr Samuel Ofosu-Ampofo, National Chairman of the NDC, said the idea was to deal with issues of monetisation and to decentralise Party funding across the country.

“I believe one of the things that our constituencies and regions have been clamouring, is to ensure that we have fair means of distributing resources,” he added.

Mr Ofosu-Ampofo encouraged Party members to contribute their quota towards ensuring that the party executes its measures towards winning the approaching general elections.

Mr Kwame Peprah, the Chairman of the Finance Committee of the NDC said about 60 per cent of the conflicts within the party could be related to financial decisions.

He said in some of their reviews in the past, the major problems had to do with lack of transparency in the way funds were received and even how they were disbursed.

Mr Peprah noted that this initiative would help address such challenges, as the system would not only show what had been received, but who had paid what; and also be able to know the various branches and constituencies the person belongs to.