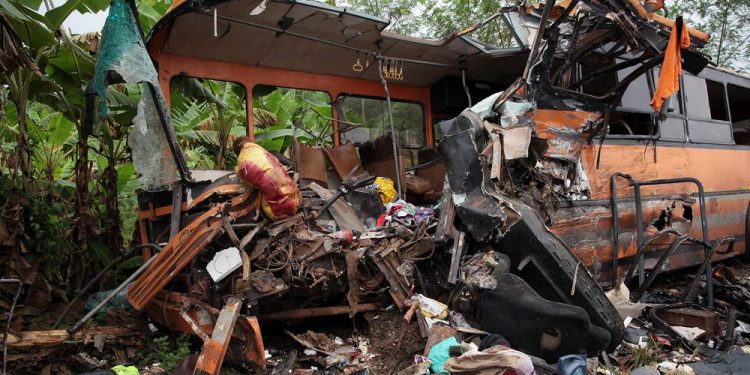 Our elders say ‘if you close your eyes to facts, you will learn through accidents.’

I’m wondering, what happens after road traffic crashes occur here in Ghana? Are we awoken to the mess created or we keep our eyes shut?

It happened again, yet another road crash! I picked up my phone on Monday only to read a story that not less than 26 precious lives had been lost on the Kintampo-Tamale highway.

It was like a déjà vu. It all seemed familiar; the script from CitiNews’ correspondent, Michael Sarpong Mfum and then the response from the police service. I then remembered the gory road accident that occurred in Dompoase, along the Cape Coast-Takoradi stretch on the dawn of January 14, 2020, just two months ago.

We hadn’t recovered from the impact of that accident that claimed 34 lives and left 57 others in critical conditions and yet, another one is has come upon us!

So between January and March 10, 2020 Ghana has lost 393 lives through road crashes. It works out as 393 deaths in 70 days of the new year. How bad should it be to warrant decisive action?

Usually, this is what happens; politicians come forward to donate to bereaved relatives, the media hit hard on the drive safely campaign and then, we go back to how it all was again like nothing happened.

After all the noise following the Dompoase incident, what changes were made? What measures were put in place to ensure we never have to go back to losing lives in this manner? Do we learn as a country at all?

According to a provisional report from the Motor Traffic and Transport Department (MTTD) of the Ghana Police Service, last year, 201 lives were lost in January alone, this year the numbers increased to 221. This reflects a 10% increment in deaths.  In all, there were 1,191 road crashes in January 2020, as against 1,036 in January 2019.

This is worrying to say the least. The statistics appear like just numbers until you consider that these are lives lost. Precious lives of loved ones, fathers, mothers, children and friends. Breadwinners in some cases. Can we imagine the eternal impact such a loss will leave on families and people’s aspirations?

The President in his speech on Independence Day 2020 mentioned a number of areas the country has been seeing improvements in his view. ‘We are making progress,’ he assured. But I dare to ask, are we progressing in death rates on our roads or we are progressing at putting measures in place to reduce the death rates if not totally nip the canker in the bud?

The statistics also showed an average of seven deaths daily for the first month of 2020 from road crashes mainly due to reckless driving. Striking, isn’t it? The last time I checked, next to God, our lives were in our hands.

I have come across many quotes such as one from Lex Brown which says “accept responsibility for your life, know that it is you who will get you where you want and no one else.” But in a commercial vehicle especially, passengers play little or no role at all in taking responsibility for their lives. This may be because they either feel powerless thinking the driver is doing them a favour, forgetting that they actually paid for the driver’s service, or they just are not bothered. In some cases too, the drivers will just not listen and do as they please.

It is no surprise that the Motor Traffic and Transport Department (MTTD) of the Ghana Police Service, has attributed two of the most fatal road crashes to hit the country this year to recklessness on the part of the drivers. What is being done? Are we angry enough as a country to call for reforms in our road safety regime? I don’t think so. Is it not high time we became proactive and not wait for things to take us by surprise?

I think it is high time the laws were enforced with no reservations. Vehicles that are not road worthy should be taken off the road, and drunk drivers prosecuted. Innocent lives should not be wiped out this way. What did 8 months old Adepa Ansah who died in the Dampoase accident do to deserve such death? What did the 12-year-old who also died in the recent Kintampo accident do wrong? It is time we demanded right things done.

Passengers should play their part by insisting on drivers stay within speed limits.

I conclude with Bob Marley’s words, “how long shall they end the lives of our loved ones, while we stand aside and look?” The time for action is now! The solutions are not beyond us. We must just garner the requisite will and make the necessary changes and enforce our laws on road safety.

The writer, Edna Boakye, is a National Service personnel with Citi FM/Citi TV.