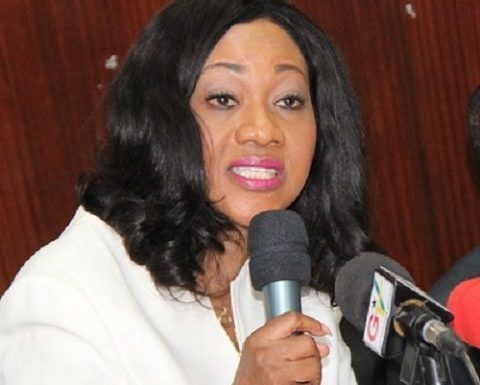 She stated that the exercise would commence from Friday, June 7, to Thursday, June 27, and will start from 6am to 7pm daily.

This will include Saturdays and Sundays.

She disclosed that there would be two methods of registration: registration at all district offices of the commission, and this would run simultaneously with the limited exercise in riverine areas.

According to her, these riverine areas would be disclosed during the EC’s publicity campaign.

She said rather, “It is the EC’s interest to have 100% voter turnout during registration.”

Mrs Mensa made this clarification when she addressed pressmen on the modalities set out for registration towards the upcoming elections.

She said that the EC had decided against a wide registration process because that would have meant procuring new voter registration kits.

“We will be saving this nation some good money if we go in for modern, user-friendly gadgets as opposed to what you have in 2011 that is costly to maintain and also costly to buy,” she added.

She described the EC’s decision as “a brave one”.

However, Mrs Mensa failed to reveal the cost of the modern, user-friendly gadgets for comparison with the cost of procuring the existing Biometric Verification Devices (BVD).

She also said the limited exercise would be an opportunity to train the EC’s staff in the use of these new machines.

The district level elections will be held on December 10, 2019.

In the 2016 elections, the EC initially presented a GH₵1.2 billion budget, but that was slashed by as much as GH₵400 million to GH₵826 million by Parliament.

Donor money from organisations such as the European Union also supplements the EC’s budget.

But in 2012, it cost Ghana GH₵515 million, representing a GH₵377 million rise from the cost of the 2008 elections, which included a run-off.

In 2012, the increase from GH₵138 million to GH₵515 million represented an estimated 273% more money being used for the election.

Looking at figures available, the 2016 elections will cost the country 35 times what it cost us in 2004.

This means the EC approximated the 2016 election to cost an estimated 60% more than the 2012 election cost the nation.

Why is it costing so much?

The voting population has been increasing. In 2008, it was 11 million Ghanaians while in 2012 it was 14 million. Those figures have risen to 15.7 million eligible voters for the 2016 election.

There should be more ballot papers and boxes, plus ink and other essential electoral materials to cater for the increase.

The voting process has also been altered significantly with the introduction of biometric data information and the use of the Biometric Verification Devices.

The EC is also set to increase remuneration for its staff and those who have been specially recruited just for this election. For this election, it is employing highly educated officers to safeguard the electoral process and the results.

Dr Kwadwo Afari-Gyan, former Chairman of the Electoral Commission, said the 2012 elections in Ghana encountered several logistical and technical challenges because of the introduction of the biometric registration machine.

Sharing Ghana’s experience on the use of biometric registration in Election 2012, Dr Afari-Gyan said the adoption of the biometric machine in the elections was to help ensure a free and fair election.

It was also to help eliminate multiple registrations, impersonation and also minimise the incidence of fraudulent malpractices in the 216 districts that Ghana had at the time.

He said there were challenges such as the breakdown of registration machines that led to the loss of data, as well as operators entering wrong keys and giving several print commands leading to multiple printing.

The use of wrong codes by machine operators, as well as other logistical challenges, including transportation problems, difficulty in locating registration centres, shortfalls of registration materials, and lack of funds to buy fuel for generators to power the biometric machines resulted in some difficulties that came with the introduction of the system.

Dr Afari-Gyan said from the experience in Ghana, the introduction of the biometric machine in the voting process of elections was not the absolute answer to all election problems.

“The machines are not always the full answers to our problem, because they cannot distinguish between fingerprints of a minor and an adult, or a foreigner and an indigene,” Dr Afari-Gyan said.

Rather, he called for supervision and monitoring of the entire election process, as well as training of people who operated the biometric machines to ensure that all eligible voters were identified and allowed to vote accordingly.