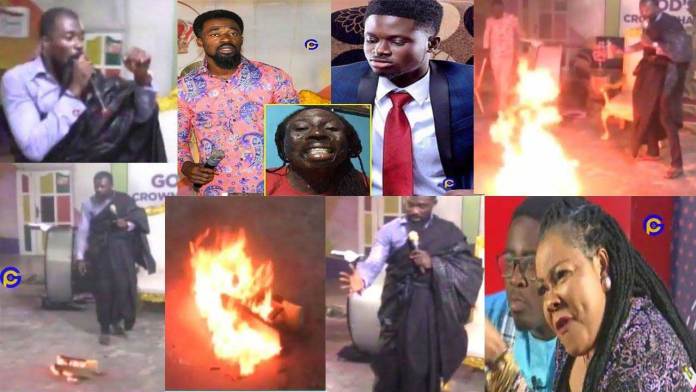 Kumasi-based prophet, Reindolph Oduro Gyebi popularly known as Eagle Prophet has hit back at his critics concerning the recent death prophecy he made.

Eagle Prophet who is obviously not pleased with the criticisms he received with regards to the prophecy, promised to deal with his critics and enemies spiritually.

Addressing his congregation, Eagle Prophet called on the God of thunder to deal with all his enemies.

Eagle Prophet also recounted the near-death experiences he had and how he was saved by God.

He disclosed that he fell in a 20 ft pit with his friend. According to him, he luckily survived but his friend passed away.

The man of God in claiming to attack his enemies burnt a small stool in his church and also poured his blood on the burning stool.

“I am a spirit and no one can bring me down. I don’t play like that when you attack me, you have called for your own death“, Eagle Prophet fired.

It will be recalled that after Eagle Prophet made the death prophecy about Lynx Entertainment signee Kuami Eugene he received a lot of backlash from Ghanaians.

Notable among them was popular fetish priest Kwaku Bonsoam who described Eagle Prophet as a hypocrite, stupid and an idiot.

According to him, the death prophecy by Eagle Prophet is fake adding that he is not from God.