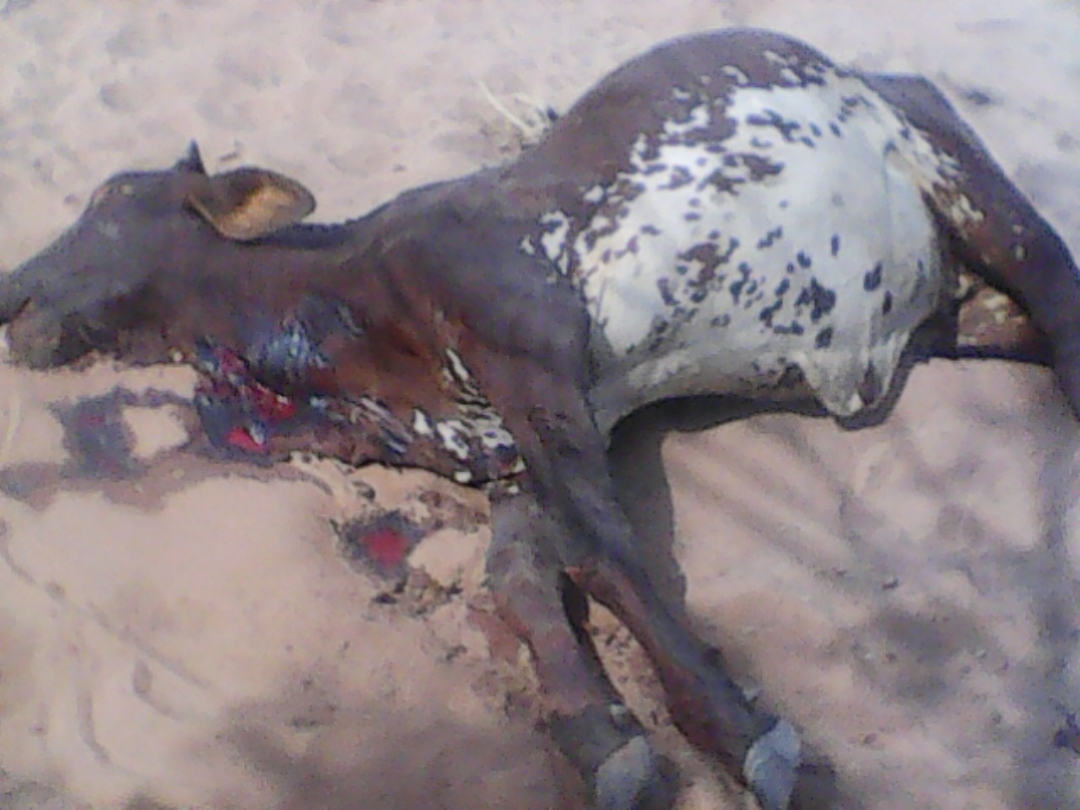 A cattle farmer, Gabriel Kuteh, who is popularly known as G.K. Family, is seeking compensation from government following the killing of 42 of his cattle, 24 of which were pregnant, by soldiers from ‘Operation Cow Leg’ at Sakabo in the Kwahu Afram Plains South District of the Eastern Region.

Mr Kuteh, in recounting the ordeal, told The Finder that on March 14, 2019, he had a call from his cowboys that his cattle had been gunned down by the soldiers without any provocation.

He told The Finder that his cattle were en route from being watered when they chanced upon a convoy of soldiers coming from operations.

Upon seeing the soldiers, Mr Kuteh said, the herd boy, who is about 10 years old, fled out of fear.

This riled up the soldiers, who were under orders to shoot any cattle they encounter.

Consequently, 27 of the cows died on the spot.

The other cows fled from the loud noise of the guns, but 15 of those that had sustained bullet wounds died a few days later.

Mr Kuteh told The Finder that upon hearing this, he moved from Akate, a market town in Afram Plains, to Sofokofe, the scene of the incident.

He claimed to have spoken to one of the soldiers who were involved in the shooting.

According to Mr Kuteh, the nameless soldiers told him that they had been called upon by the DCE to kill the cows.

The following day, Mr Kuteh said he searched for the DCE, George Ofori, with the help of a journalist based in the area.

He claimed the DCE confirmed ordering the soldiers to come and kill the cows because some Fulanis had moved into the district and had been causing mayhem. This was what had forced him to call upon ‘Operation Cow Leg’.

He claims that the DCE admitted that the soldiers had been looking for an itinerant herd of cattle belonging to Fulani herdsmen, and if he claims that the ones which had been killed at Sofokofe were his, then that was an error.

He told The Finder that Mr Ofori assured him that the issue would be discussed at the District Security Council (DISEC) meeting and if there is any compensation, that would be decided at the DISEC meeting.

Mr Kuteh said after this encounter, he heard nothing from the DCE for a while.

He, therefore, called the DCE, only for the DCE to cast doubts about the ownership of the cattle, claiming they could not belong to one person.

In response, Mr Kuteh said he told the DCE to go make enquiries from the people who first reported the incident to him about the ownership of the cattle, which the DCE agreed to do.

He, however, claims that the DCE had since not contacted him about the case.

When The Finder contacted Mr Ofori, he denied any culpability, saying that Afram Plains had recently had an influx of ranging cattle from Agogo and Kwahu East, and since Afram Plains was a farming district, they took the decision to appeal to the Minister of State in charge of National Security to intervene as the indigenes’ farms were under threat from the over 10,000 cattle which had moved into the district.

Mr Ofori recalled how some farmers had been attacked by these herdsmen.

He also accused the herdsmen of harassing the women folk of the district whenever they met them on their farms.

The DCE told The Finder that, “It was [the] decision of DISEC, not [the] decision of [the] District Chief Executive. So we invited the (sic) op… Through [the] National Security Minister, we had contact with the ‘Operation Cow Leg’ to drive these nomadic herdsmen away from the district so that the farmers will be free to go to farm and do whatever [they needed to do]. They should be free to farm without any interference from these herdsmen.

“So they came; they did an operation, and the operation they did was in accordance with the decision of the DISEC.

“Before a soldier will kill any animal, they will call the person who is following the cattle. When they call you and you explain to them maybe we are here, we are local people, maybe we are taking them to drink water, they don’t touch them. But when they call you and you run away, then they will chase you. That is exactly what happened. All the instances they called the Fulani people who are following the cattle then they start running away with the cattle. And a soldier who is doing the operation calls you and you run away, you see what will happen. Even that one, they don’t kill so much as they are saying,” he said.

When queried about the number involved in this particular case, Mr Ofori replied, “Even if they are hundred, they can kill all of them, depending on the area and the way they are destroying the people’s farms.”

When pressed about the owner of this particular herd being a resident of the community, he again replied, “That is where the problem lies. If you identify cattle, once they go and destroy people’s farms, they say it’s for Fulani. You will say whatever it is, you’ll call them to come and maybe pay for the thing that they have destroyed; they’ll say it’s not their cattle; they’re Fulani people, but when operation come and they are affected, they say it’s my cattle.”

Mr Ofori denied assuring Mr Kuteh that the council would deliberate on compensating him for his loss.

He said, “What I told them is when National Security does an operation, it’s an operation. But the way he was begging that at least we give him something small, I said I cannot stand here and promise you, but I’ll meet with the management of the assembly and whatever comes out of it, I’ll inform him. So it’s not like I have promised him that we’re going to compensate him. No.

“I told him that this is an exercise, and the exercise is a decision of DISEC. That’s all.”

Mr Ofori told The Finder that the DISEC had decided not to compensate Mr Kuteh as the operation was backed by the voice of the people.

He concluded by accusing Mr Kuteh of engaging in child labour by hiring the services of children to herd his cattle.