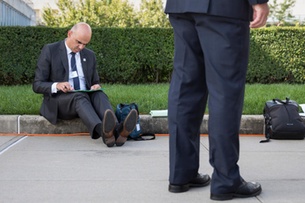 Images of the Swiss president sitting on the ground in New York City have sparked a conversation on social media. But for the Swiss, it’s just business as usual.

During last week’s General Assembly of the United Nations in New York, Swiss President Alain Berset decided to cool his well-maintained heels and take a curbside seat. The sight of an important man sitting on the ground grabbed the attention of the social media world – especially in Africa.

One blogger used the example to criticize the Ugandan president: 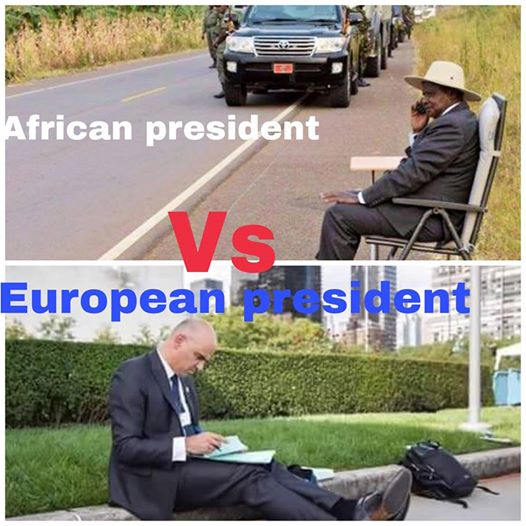 This kind of mentality of entitlement to comfort is largely responsible for why African leaders keep their citizens poor. President Museveni of Uganda blocked traffic in a busy highway to take a phone call.

In contrast the Swiss President Alain Berset was photographed reading his notes on the pavement outside the United Nations HQ in New York during the 73rd general assembly.

As the image made the rounds, users kept adding to the story, saying that during the UN assembly, Berset was cooking his own meals in a small apartment shared with his staff. A spokesman later set the record straight, telling Swiss news portal watson.chexternal link that Berset had stayed in a hotel, as usual.

And a few years back, ex-colleague Didier Burkhalter – then-president and foreign affairs minister – stood out from the Twitter crowd while waiting for the train, unaccompanied by security. This is the norm for high-ranking Swiss politicians, and in the capital, Bern, it’s not unusual to find yourself riding the tram or shopping with a federal councillor.

But eschewing bodyguards can be risky. In 2012, Micheline Calmy-Rey – who had recently retired from her post as foreign affairs minister – was attacked by a man who pushed a pie into her face in Geneva.

Of course in potentially risky situations, Swiss leaders have a security detail. But it’s up to them whether they’d like to sit on the ground.