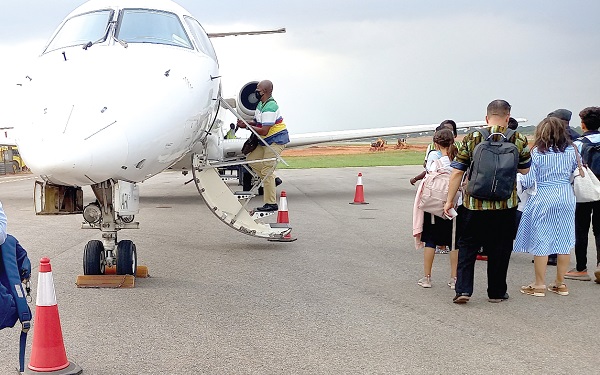 Since the easing of the COVID-19 restrictions in the country last year, domestic air travel has increased, recording the highest patronage in the last eight years, data from airport authorities have indicated.

This represents a 70.57 per cent surge in domestic passenger traffic over that of the previous year, indicating the full recovery of the aviation industry from the impact of the pandemic.

There was a halt in domestic air operations in Ghana between March 30 and April 20, 2020 as part of measures by the government to curtail the spread of COVID-19.

Experts have attributed the growth to strong consumer confidence in the aviation industry, which is hinged on safety, reliability and affordability.

Further analysis of the data released by the GACL shows fluctuations in the domestic air traffic.

The number increased to 722,721 last year, with indications to grow further in the coming years.

The travellers were airlifted by Africa World Airlines (AWA) and Passion Air to and from Accra to the five regions with airports — Northern (Tamale), Ashanti (Kumasi), Western (Takoradi), Volta (Ho) and Upper West (Wa).

AWA carried 65 per cent of the throughput, while its competitor, Passion Air, handled the rest.

An international aviation expert, Mr Sean Mendis, said Ghana was one of the two countries in the world (the other being Russia) with a million annual domestic passengers that had shown actual growth in domestic air travel in 2021, as against pre-COVID-19 benchmarks in 2019.

That, he said, was an indication that policies adopted by stakeholders in the industry when domestic flights restarted in May 2020 had been successful.

“Interestingly enough, the domestic market in the country is actually suppressed somewhat because neither of the domestic operators has been able to expand fast enough to keep up with the growing demand.

“I estimate that there is approximately 30-40 per cent of demand that is being spilled at the current price points, and likely as much as 150-200 per cent unmet demand at a lower price point,” he said.

According to Mr Mendis, there was a huge potential for operators who would charge lower fares in the domestic market and provide the appropriate value proposition to more travellers.

The Head of Commercial at AWA, Adedayo Olawuyi, told the Daily Graphic in Accra that the upsurge in numbers was an indication that the market was responding to efforts put in place by stakeholders in the aviation industry.

“Since the pandemic broke out, we have stayed in the market continuously, building capacity on all major routes and we can see that the market has responded adequately.

“The advent of COVID-19 also allowed a lot of people to start looking inward and we saw more intra-country travels since 2020, which has reflected in increased domestic traffic,” he said.