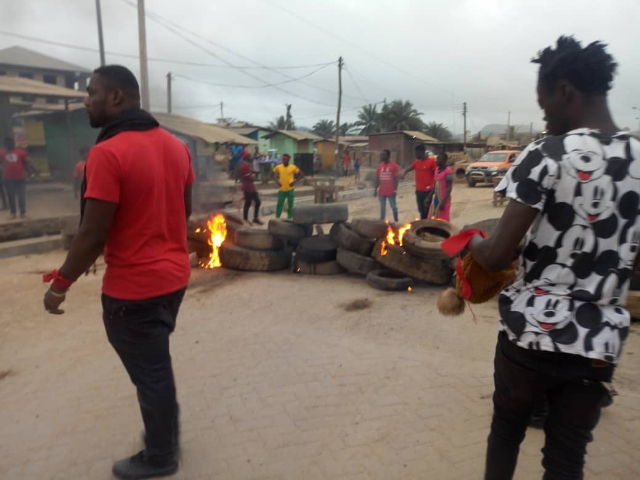 Residents of Tarkwa in the Western region have been urged to exercise restraint as government works to get a contractor on site to fix their broken roads.

Minister for Roads and Highways, Mr Kwasi Amoako-Atta said though the demonstration was a good reminder, it was not the panacea to get the roads fixed.

The angry residents, numbering over a hundred, clad in red bands and chanting war songs, set ablaze car tyres to prevent vehicles from moving in and out of the municipality on Wednesday April 10, 2019.

This was to register their displeasure over the bad nature of roads in the area. The residents blocked the main road that links Tarkwa to Takoradi and the Western-North Region.

The protest, which brought business activities to a halt, was the second of demonstrations in seven months by the people and traditional leaders of Tarkwa.

The residents warned the government to brace itself for more protests until the roads are fixed.

But, speaking on Adom FM’s morning show, Dwaso Nsem Thursday, the Minister for Roads said the problem is monetary.

He explained that, the erstwhile Mahama administration awarded several road contracts without any budgetary allocation, a situation he described as unfortunate.

Even more worrying, the Minister noted, is government’s inability to access the Road Fund established in 1997 to finance road maintenance across the country.

He stated that, the Fund under former President John Mahama was used as collateral for a GH¢1.5 billion loan at the United Bank for Africa.

“We can’t access the road funds, we owe a lot of contractors. Though government has been able to pay some, we have about six hundred million cedis in arrears,” he bemoaned.

This notwithstanding, Hon. Amoako-Atta said they are still talking to the contractor at Tarkwa to return to site while they work to mobilise funds for him.