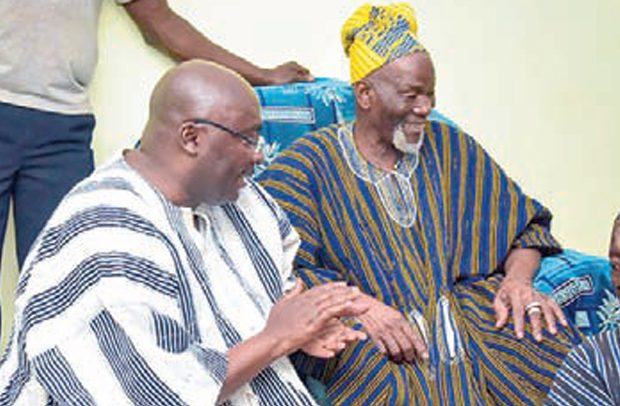 He noted that hitherto to the coming into office of the current administration, there was recurring chieftaincy violence in view of the irreconcilable differences between the Abudu and Andani royal families; but stood his grounds and worked towards resolving the long-standing feud.

Speaking at the Gbewaa Palace in Yendi during a courtesy call  on the Ya-Na Abukari Mahama II, the Vice President said” the biggest problem in Ghana prior to the assumption of office of the Akufo-Addo administration was the recurring violence in Dagbon and the need for peace. Akufo-Addo promised to bring finality to the raging Dagbon crises if made president”.

According to him, skeptics doubted him but he lived to his promise and ensured that the funerals of the two chiefs were performed and a Ya-Na enskinned.

For this reason, he observed that the people of the area are forever indebted to the President for bringing about peace which is a major pre-requisite for development.

“Akufo-Addo promised to bring finality to the raging Dagbon crisis and never slept over it when he was made President in January 2017. He ensured that there has been peace and you are the Ya-Na today. No money pay for the peace so Akufo-Addo has left us with a huge debt”, he stressed.