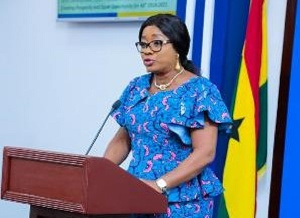 The Minister for Gender and Social Protection, Cynthia Morrison has hinted that government will today announce plans it has for homeless people during this period of partial lockdown.

She indicated that this has delayed because they could not have worked with the current data available at the Ministry because most of the head porters and other homeless people in the capital cities locked down have left for their hometowns.

She made this known when she spoke to Peace FM in an interview monitored by MyNewsGh.com.

According to her, the Ministry has since last week picked up data and has finalized on the numbers and will in collaboration with the Information Ministry announce plans government has for such individuals.

Agencies and bodies supporting this move by the government she added, will also be announced when the Press is addressed today.

Meanwhile, over a dozen of women and children in two trucks en route the Northern Region were impounded at the checkpoint of a COVID- 19 joint security at Duampompo in the Ejisu-Juaben Municipality in the Ashanti Region.

The drivers had covered the trucks with tarpaulins to try and outsmart the security personnel stationed at the various checkpoints.

Passengers on board the vehicles were mostly head porters who were travelling to the North East Region with their children.

According to these women, when they heard of the lockdown, they decided to go to their hometowns because they have nowhere to sleep.