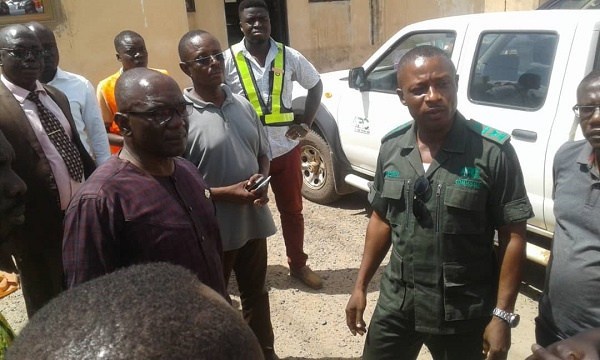 Three trucks carrying rosewood from Dambai to Tema were intercepted at the Afienya axle weighing point in the Ningo Prampram District of the Greater Accra Region sparking confusion between the personnel from the Ghana Revenue Authority and Economic and Organised Crime Office.

The Counter Intelligence Unit of the GRA first intercepted five 20-footer containers carrying rosewood from Dambai to Tema Port on the Akosombo highway.

The interception comes on the back of a ban on the exportation of rosewoods.

The goods were intercepted at the Afienya Axle weighing point.

Following the arrest, the GRA personnel, who were accompanied by some armed soldiers, requested for the permit covering the consignment which led to some confusion between them and the personnel from EOCO, who emerged to claim jurisprudence over the consignment.

This led to some exchanges between the two units.

According to the GRA officer, who gave his name as Obiri Yeboah, the EOCO officials asked him to release the truck keys to them but he refused to do so with the excuse that, the GRA had to perform due diligence on the trucks at the customs collection point at the airport before it could be handed over to any other agency.

The release of the keys resulted in a confusion between the two parties which nearly became confrontational at a point.

While at it, the axle weighing officials were also demanding payment for the penalty for overloading the trucks carrying the rosewood which amounted to five thousand five hundred Ghana cedis.

This was however not adhered to as the soldiers that accompanied the GRA officials to the scene ordered the truck to move upon the orders from an officer from above whose name was not given to the media.

A security personnel at the Axle Load station, W.O, Musa Tibila expressed his disappointment at the manner in which the trucks were asked to be released without the payment.

He was however quick to add that despite the release, there was an assurance from the GRA that the amount in question would be collected from the owner of the goods and later sent to the head office of the axle loading.