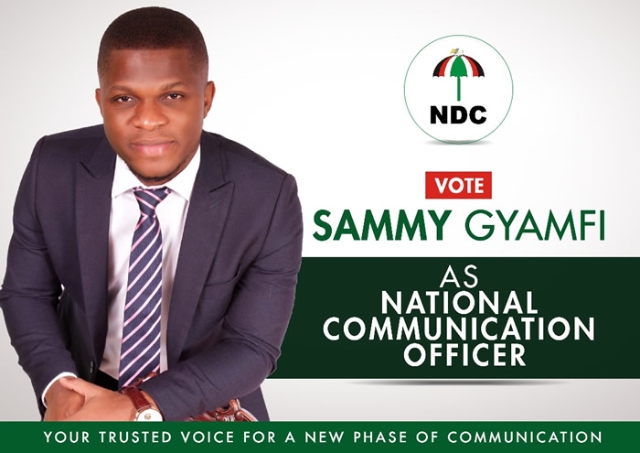 BestnewsGH.Com can confirmed that the vetting committee of opposition National Democratic Congress (NDC) has cleared Sammy Gyamfi to contest for the National Communications Officer position of the party.

This website can also say on authority that Sammy Gyamfi, a former aide to former Kumasi Mayor, Kojo Bonsu will be number one on the ballot paper that will be issued to delegates during the elections slated for November 3rd.

In a video post that has gone viral on social media, Sammy Gyamfi immediate past SRC president of Ghana school of law was seen addressing supporters at the party headquarters after a “successful vetting”

Supporters of Sammy Gyamfi a member of national communications team of NDC are seen in the video singing, drumming amidst dancing to show their joy over the vetting committee’s approval of Sammy Gyamfi to contest in the elections.

Prior to his vetting, there were rumours on social media and other traditional news portals that suggested that the loudmouth but soft spoken politician had been disqualified from taking part in the elections.

According to the earlier reports which turned out to be fake, the outspoken young man was disqualified by the party’s Vetting Committee for not meeting the criteria needed to contest for a National Executive position as prescribed in the party’s constitution.

Reports had it that Mr. Gyamfi’s purported disqualification was premised on Article 40 (2) of the NDC Constitution which states that “A member of the party is not qualified to contest for a National Executive Committee position unless the member has held an executive position within the party or government before seeking election.

However, Sammy Gyamfi in the video recorded Friday at the party head office rubbished the report saying “my vetting was successful and I Sammy Gyamfi will be number one on the ballot paper”.

Sammy Gyamfi will now battle it out with his only contender and colleague Fred Agbenyo who is also vying for the same position of National Communications Officer of the NDC.

Yesterday, the dream of two aspirants Wonder Mandilo, former NUGS President and Elikem Kotoko, former General Secretary of the Ghana Union of Polytechnic Students (GUPS), hoping to become the national youth organizer of the party were crashed by the vetting committee.

Two other candidates vying for national youth organizer position George Opare Addo and Yaw Brogya Genfi were however cleared by the vetting committee to contest in the elections.

The Vetting Committee of the NDC is made up of the following, General Carl Modey, Hon. Hajia Laadi Ayamba, Hon. Marrieta Brew Oppong and Hon. Magnus Kofi Amoatey.