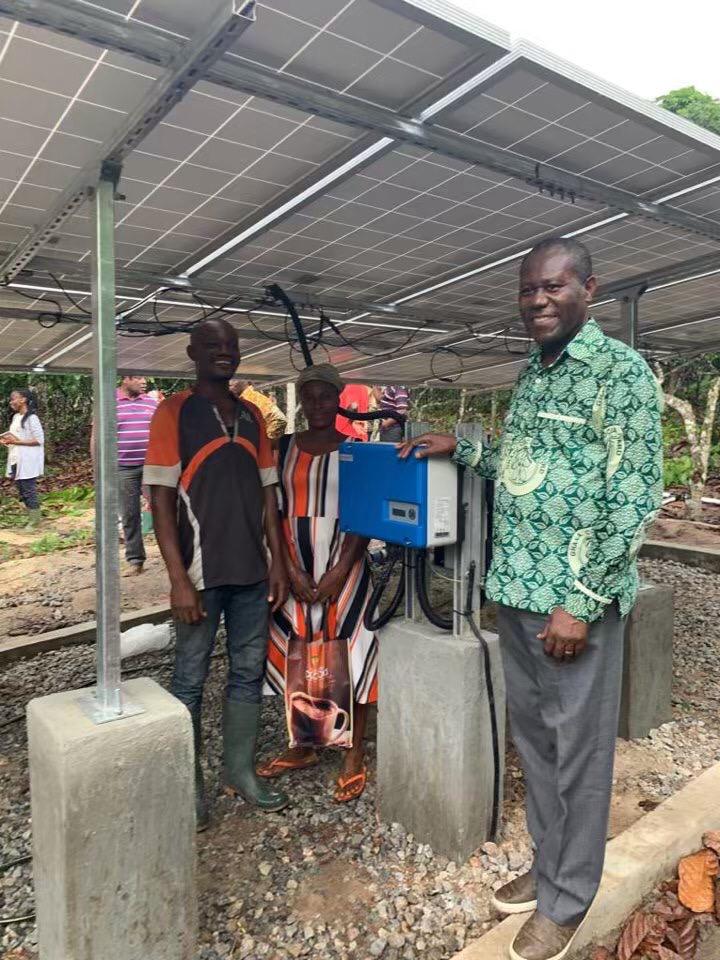 The Chief Executive of the Ghana Cocoa Board (COCOBOD), Joseph Boahen Aidoo, has officially handed over an ultra-modern solar-powered irrigation system which will enable year-round production of cocoa on a farm and more than double yields.

The irrigation system, which also has a fertiliser dissemination component, is the first of its kind and the first of many to be rolled out across the country.

It has been installed on a 30-acre cocoa farm owned by Solomon Tahola at Assin Fosu, in the Assin North Municipality of the Central Region.

Boahen Aidoo told the farmer to put the irrigation system to good use. It should ensure a continuous harvest of cocoa even during the harmattan season when cocoa yields turn to drop significantly due to the scarcity of water.

Describing the operation of the system, the Deputy Chief Executive in charge of Operations at COCOBOD, Dr Emmanuel Opoku, said the system “has a pump that has been designed to draw water from underground to the drip pipes” which have been laid out on the farm at the bases of the cocoa trees.

“It has a fertigation system also and is entirely powered by solar energy. The solar panels supply power to the pump, which in turn draws the water and distributes it straight to the cocoa plants.” It has been designed to work for six hours in a day, stating at about 10am when the sunshine is bright enough to power the pump.

Dr Opoku went on to say that the system is designed such that when there is no water underground to draw from, the pump stops working, but “it works so long as there is water and there is energy from the sun”.

“It is also such that the very end of the drip pipes has the same water pressure as the beginning so that the water flowing through the irritation system flows evenly to all the plants.”

To use the same irrigation system to apply fertiliser to the cocoa trees, the farmer needs only to fill up a chamber attached to the system with the fertiliser and it will flow through the drop pipes to the plants as the pump pumps water to them.

The installation of this new solar-powered irrigation system by COCOBOD on cocoa farms comes at no upfront cost to the farmer. Instead, farmers will be given very flexible payment schedules to pay for the system, although the increase in their yield volumes will be immediate.

The ceremony to hand over the irrigation system took place during the COCOBOD Chief Executive’s week-long tour of cocoa-producing regions in Ghana — a tour which began on Monday, May 13 and is still ongoing.

Mr Aidoo and other top management executives of COCOBOD have been visiting cocoa farms and farming communities to assess their level of participation in the various farm Productivity Enhancement Programmes (PEP) by COCOBOD.

The tour is also to gather firsthand knowledge of the challenges facing farmers at different parts of cocoa-producing areas and to hold farmer rallies to interact with farmers.