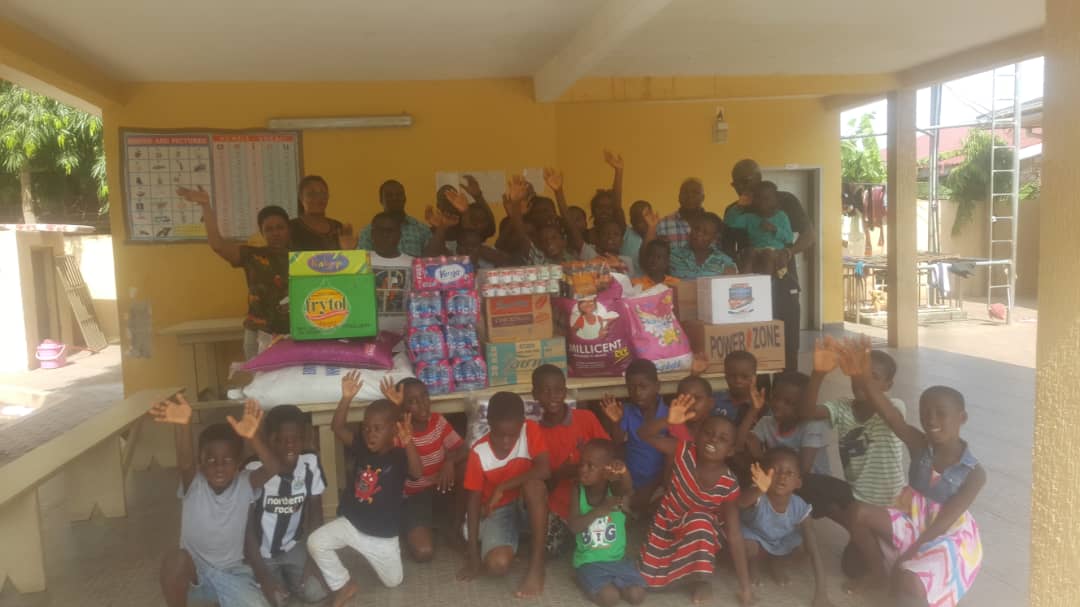 A passionate appeal has gone to the Ghana Police Service to step up its investigation into the murder of Mrs Josephine Tandoh Asante lest it also adds up to the statistics of undetected homicide cases in the country.

The appeal was made by Mr Johnny Koku Biga, member of a team of former classmates at Tema Parents Association of the murdered manager during a presentation to the Amazing Shepherd Orphanage at Coastal Estate near Afienya on behalf of their departed mate.

Mrs Tandoh Asante, Manager of Marketing and Public Affairs at the Tema Port of the Ghana Ports and Harbours Authority (GPHA) was murdered in her Emefs Hillview Estate in the early hours of 13th January 2019.

According to Mr Biga, the police must not be shy in asking for logistical and other supports from both local and international partners to enable it to unravel the mysterious death.

Mr Biga went on that the public which has been closely following events after the murder of Mrs Josephine Asante gets worried by the day when right from the onset, police started making contradictory pronouncements with regard to evidence obtained at the scene.

He mentioned the earlier public statement by the police in Tema who were the first to handle the body to the effect, the presence of suspected semen on the body

The police headquarters few days after taking over the investigation of the case issued an official statement to debunk the claim by police in the harbour city.

Based on the earlier statement by Tema and upon request to the TDC District Court, Her Ladyship Mrs Akosua Anokyewaa Agyepong presiding ordered for the DNA test to be conducted at the Forensic Science Laboratory (FSL) on two suspects in custody.

After sometime, the court issued a subpoena to the head of the FSL to produce result of the test so conducted on Thursday 28th March, 2019, but head of the unit was absent. Further enquiries by Her Ladyship Mrs Agyepong in the open court disclosed that the inability to appear was as a result of late service. This compelled the court to issue a second subpoena for the boss of the unit to appear today Monday 8th April 2019.

Mr Biga continued that just about the sometime, the Director General of the Criminal Investigation Department (CID) of the Ghana Police Service, Commissioner of Police (COP), Mrs Maame Tiwah Addo-Danquah disclosed to the Chronicle that government had released an amount of Ghc 300,000 (three hundred Ghana Cedis) to resource the crime laboratory

The money is to be used to replace obsolete equipment and for the purchase of reagents to enable the facility to conduct DNA tests locally.

A South African company responsible for the manufacture of the needed reagents is expected to visit the installation and calibrate the equipment which has been idling for some time now.

Mr Biga is of the view that the earlier police made known its logistical bankruptcy to its partners for assistance, the better so that organizations or even individuals with interest in particular cases could sponsor efforts for the result

Presenting the assorted items worth Ghc 2000 (two thousand Ghana Cedis) to the orphanage, Mr Robert Tandoh, brother of deceased stated that offering support to the needy was the greatest passion of Mrs Asante and so the family was emotionally touched when her former classmates decided to continue from where she left off.

According to him, the classmates which included himself will endeavor to keep ties with the home and appealed to benevolent societies and individuals to offer support to the needy.

The owner of the orphanage, Madam Martha Alipui thanked the classmates for their kind gesture.

According to her, the center with a population of 30, and ages between 2 and 19 years has been in operation for the past three years

She said that upon contacting Mrs Asante for corperate assistance, the deceased did not wait for response from the Authority but on her own started supporting them.

Madam Alipui went on that the deceased embarked on providing the center with student beds and that it has become a big blow to the orphanage when news of her murder came out.

A Ministry of Social Welfare recognized home, she stated that apart from receiving children from the police through the social welfare, other sources are from the street.

Also present at the presentation were representatives of her classmates, family members and Mr Kwame Asante, husband of deceased who promised to follow with the provision of the bedsteads.