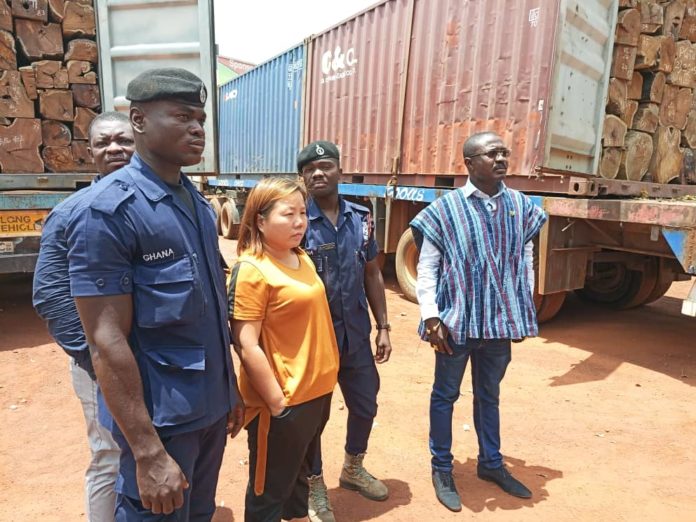 The Chinese woman who was arrested for possessing large quantities of Rosewoods have been released.

Starr News sources says she has been put on inquiry bail.

The 43-year-old Chinese woman identified as Helen Hyuan was arrested on Monday.

She was arrested at a police checkpoint in Datoyili, an outskirt suburb on the Tamale Kintampo highway, with four containers all together loaded on two heavy trucks

The Northern Regional Police Crime Officer, Supt. Otuo Acheampong addressed the media on Tuesday, saying the woman was arrested Monday at about 9am, following an intelligence tip-off.

The rosewood lumbers were suspected to have been harvested around Damongo and other areas in the Savannah Region and the Chinese woman evaded multiple security checkpoints before she was nabbed in Tamale.

“She claims she is the owner of the rosewoods and that she was transporting the products to Tema”, Supt Acheampong said.

The suspects did not have “log measurement and conveyance certificate as well as lumber inspection certificate”, the Crime Officer said.

“We also established that she did not have her passport on her for us to also to determine whether she has residence permit or working permit”.

The police added the Chinese woman could not also produce a single paper work permitting her stay and doing business in Ghana.

The consignments together with the Chinese suspect have been detained at the regional headquarters as further investigations are underway.

She has since been preliminary charged with possessing banned forestry products.

Meanwhile, Helen Hyuan told reporters that she was asked by the checkpoint police officers who arrested her to offer them bribe of about Ghc8,000, for her release, which she could not afford.

“When we got to the barrier the policemen were demanding money,” she said, while investigators whisked away.

“And because the negotiation was not allowed that’s why they sent me here. Each Container, they were demanding GH2,000”.

The Ministry of Lands and Natural Resources in March this year, issued a total ban on rosewood conveyance, transportation and exportation.