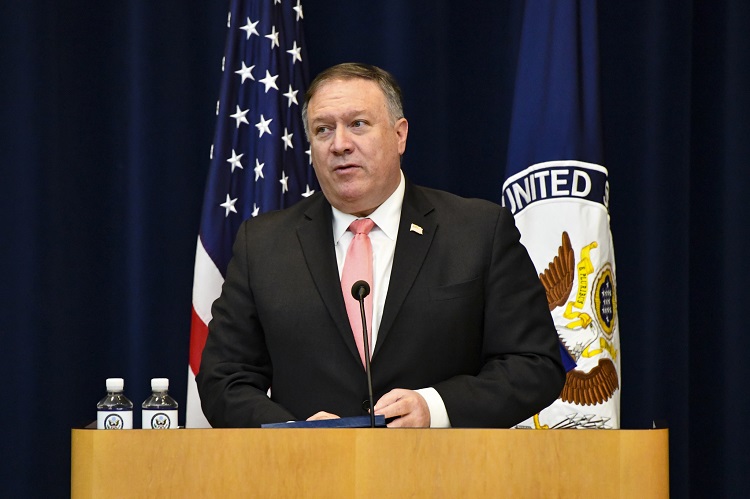 The dismissal of the former Chairperson of the Electoral Commission, Charlotte Osei, the murder of the 7 youngmen in Asawase by the police and the issue of political party vigilantism are issues that featured prominently in the United States of America (USA) Human Rights Report for 2019.

Other issues raised in the report which was presented in Washington yesterday, Wednesday, March 13 2019 were the harsh and life threatening Prison Conditions, violence and harassment against journalists as well as corruption and lack of transparency in Government.

With regards to the dismissal of Charlotte Osei, the report which was presented by the US Secretary of state Michael R. Pompeo said “The June ouster of the electoral commission chairperson and the president’s subsequent stacking of the Electoral Commission with persons considered to be biased in favor of the ruling party raised questions about whether the body might be used to stifle voter registration among the opposition’s base.”

The Minority in Parliament, following the release of the report has issued a statement, demanding a sincere and determined action on it.

Read the statement which was issued by the Hon. Samuel Okudzeto Ablakwa, MP for North Tongu in the Volta Region and Ranking Member of Parliament’s Committee on Foreign Affairs below.

The Minority in Ghana’s Parliament in fulfilling our constitutional mandate and living up to the requirements of a conscientious and responsible opposition, followed keenly the release of the 2019 Human Rights Report by the United States of America.

The Report which was presented in Washington, DC yesterday the 13th of March, 2019 by US Secretary of State,Michael R. Pompeo  must be of interest to us all as we strive to entrench good governance and the respect for fundamental human rights as contained in Chapter 5 of the 1992 Constitution of Ghana.

The Minority agrees with Secretary Pompeo that “by articulating abuses and pressuring noncompliant regimes, we can affect change.”  It is our expectation though that this shared responsibility would be pursued through objective mechanisms without bias and prejudice as we all work towards the construction of a fair and just world.

Despite the fact that this report covers some 200 countries, we shall highlight the following issues as raised specifically in the Ghana country report:

As we know, the Akufo-Addo administration initiated investigations following public outcry which proved that there was no evidence that the young men were armed robbers as initially claimed by the police and for which the victim’s families have now been compensated; the perpetrators have not yet been brought to justice.

The Minority urges Government to act expeditiously to secure justice in this matter.

We also appeal to Government to pay attention to several cases of police brutality, corruption, negligence and impunity as documented in the report with the view to eliminating  this combined canker and preserving the good image of Ghana.

The report indicates that as at September 2018, Ghana’s prisons held 14, 985 in prisons designed to hold 9,875. This has exacerbated harsh conditions leading to overcrowding, food shortages, a poor sanitary environment and lack of medical care.

30 prisoners reportedly died as at September, 2018 because of these circumstances.

The Minority calls on Government to continue with former President Mahama’s programme of prison reforms which included the expansion of facilities, without any further delay.

3) Violence and harassment against journalists:

It is worrying that the report highlights 17 cases of attacks on journalists. The incident of the Joy FM reporter Latif Idrissu who sustained fractures to his skull when he was brutalized at the Police Headquarters is also documented as the report decries a lack of update from Government.

Government must be seen bringing perpetrators of violence against journalists to book. It is troubling to note that this trend of intolerance and hatred for journalists who expose wrongdoing in this Government is getting worse  as Anas Aremeyaw Anas and Manasseh Azuri Awuni become the latest victims. At this rate, we shudder to imagine what would be contained in the 2020 Human Rights Report.

It is noteworthy that the NPP MP who exposed the identity of the assasinated undercover journalist receives inglorious mention in the report.

The Ghana country report in what must be unnerving, places the spotlight on: “post-election violence, including takeovers of government institutions by vigilante groups associated with the victorious New Patriotic Party.”

The Minority hereby reiterates its call on the need to disband all vigilante/party militias NOW. President Akufo-Addo must lead from the front and not from the back as he has been seeking to do by asking party executives to dialogue.

The report states unequivocally: “The June ouster of the electoral commission chairperson and the president’s subsequent stacking of the Electoral Commission with persons considered to be biased in favor of the ruling party raised questions about whether the body might be used to stifle voter registration among the opposition’s base.”

Clearly, it ought to now dawn on President Akufo-Addo and the new EC Commissioners that the United States and the international community is watching them keenly and that indeed they know what they may be up to.

It is also obvious that the world has taken note of the unfair treatment meted out to Charlote Osei in satisfying pre-election open threats by some leading members of the NPP and therefore in the process setting a bad precedent.

6) Corruption and Lack of Transparency in Government:

A verbatim extract from the report – “The law provides criminal penalties for corruption by government officials, but the government did not implement the law effectively, and officials frequently engaged in corrupt practices with impunity. There were numerous reports of government corruption during the year. Corruption was present in all branches of government, according to media and NGOs, and various reputable national and international surveys, such as the World Bank’s Worldwide Governance Indicators and Afrobarometer, highlighted the prevalence of corruption in the country.”

It is the Minority’s hope that the infamous penchant of President Akufo-Addo acting as a clearing agent will now give way to a sincere determined effort at fighting corruption seeing that the world is highly unimpressed with his hollow rhetoric about fighting the menace.

7) Other Matters of Concern:

“Female Genital Mutilation/Cutting was significantly higher in the Upper East Region with a prevalence rate of 27.8 percent, compared with the national rate of 3.8 percent.”

“Early and forced child marriage, while illegal, remained a problem, with 34 percent of girls living in the three northern regions of the country marrying before the age of 18. Through September the CHRAJ had received 18 cases of early or forced marriage.”

“Children as young as four years old were subjected to forced labor in the agriculture, fishing, and mining industries, including informal gold mines, and as domestic laborers, porters, hawkers, and quarry workers. One child protection and welfare NGO estimated that 100,000 children were trapped in forced child labor, almost one-half of whom worked in the Volta Region where, in the fishing industry, they engaged in hazardous work, such as diving into deep waters to untangle fishing nets caught on submerged tree roots. The government does not legally recognize working underwater as a form of hazardous work.”

These three frightening predicaments ought to be a scar on our collective conscience.

We must all come together and do everything in our power to reverse this scourge.  The Minority intends to partner Government and intensify our constituency specific interventions to bring an end to this unacceptable plight confronting our children.

In conclusion, the Minority hopes that the 2019 US Human Rights Report would raise the needed awareness, trigger the necessary discussions which must ultimately lead to concrete actions aimed at securing for ourselves a far improved climate of respect for fundamental human rights and social justice.