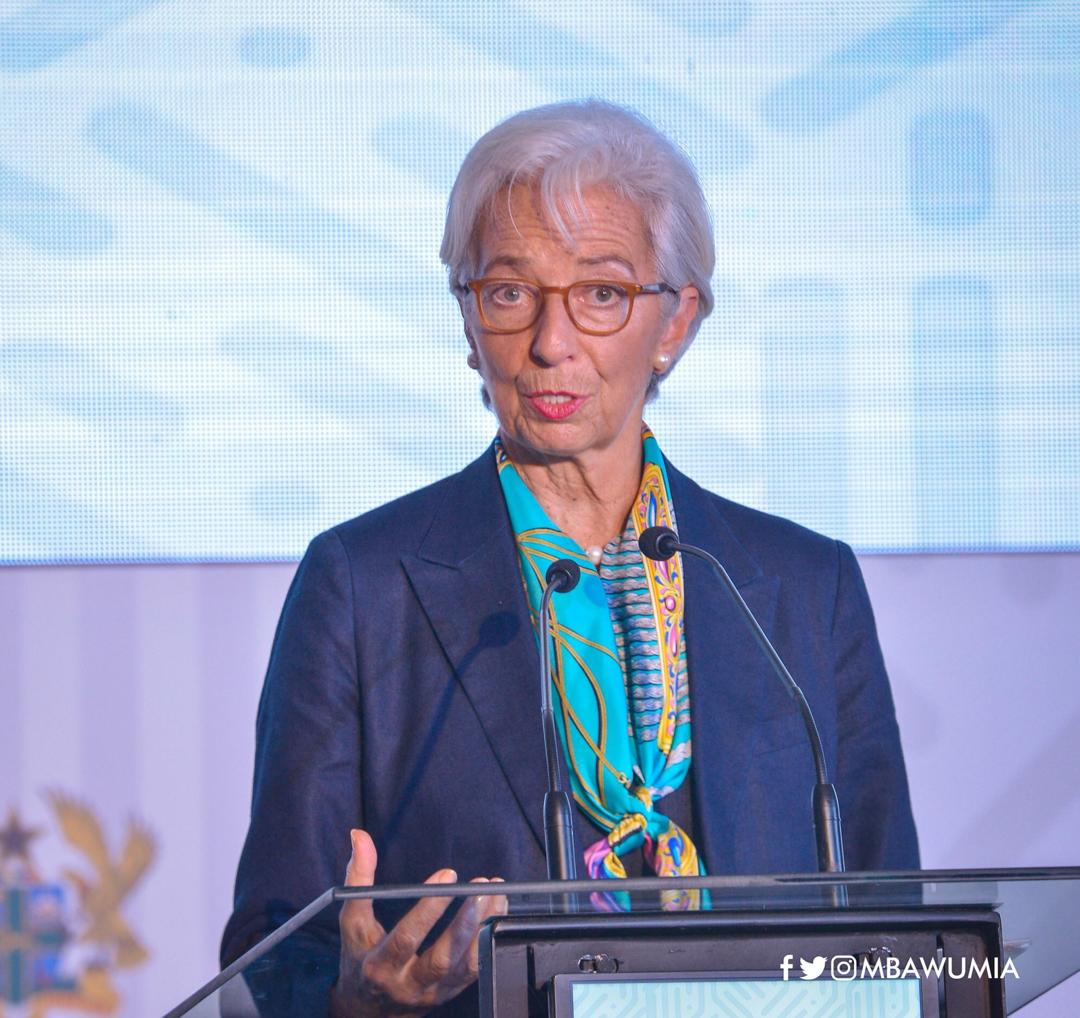 The Managing Director of the International Monetary Fund (IMF), Madam Christine Madeiline Lagarde, says African countries would not sustain their economies by borrowing.

She admonished sub-Saharan African countries to enhance their domestic tax mobilisation to sustain their economies and help them to remain sovereign.

She warned that relying on borrowing for investment in the recommended policy areas of education and digital infrastructure was risky because the borrowers are at risk from the market and at risk from the desirability of foreign investors to choose Ghana rather than the other one.

Public funds should be invested well

Addressing key stakeholders at the Future of Work in sub-Saharan Africa Conference in Accra on Monday, Ms Lagarde advised that public funds should be invested well so that it would be sustainable in the long term.

Consequently, she said there must be the right mix between domestic revenue mobilisation and borrowing, so tax is expected.

The IMF boss pointed out that implementing tax regime was not popular, but it was the sensible thing to do to boost economic growth.

“I’m not here advocating for tax, but I’m advocating for sustainable financing structure that will help digital infrastructure so that countries can sustain their growth potential and remain sovereign,” she said.

Ms Lagarde explained that developing digital fiscal infrastructure was crucial in shoring up the revenue mobilisation efforts of countries, noting that IMF research had shown that most countries increased their gross domestic products between three and five per cent by leveraging on technology.

She, therefore, said it would require sustained investment and right policy mix to utilise technology to mobilise revenues, saying that “so grab the benefit of digitisation to propel growth”.

“Our research has shown that there is potential to raise three to five per cent of GDP in domestic revenues by improving the efficiency of the tax system and through institutional reform,” she said.

“The IMF can help to achieve this potential through technical assistance, including by helping governments leveraging technology.”

Other areas that should be focused on include smart urbanisation, boosting trade integration on the continent and expanding social safety nets.

She explained the three possible Future of Work scenarios for sub-Saharan Africa, which were used to evaluate how technology, demographics and urbanisation, climate change and global economic integration could interact with each other to shape the future of work in SSA.

“These are the ‘Africa Adrift’, an unfavourable scenario where rapid automation, reshoring of manufacturing to advanced countries, hard impact of climate change had led to a SSA that [is] indebted and ill-positioned to take advantage of opportunities in the digital economy. This is not a happy scenario”

“In the second, ‘Africa for Africa’ scenario, there is increased tensions and inward-looking policies due to displacement of worker by technology and increasing income-inequalities; where African leaders responded to the challenging external by boosting regional trade, such as through the signing of the Continental Free Trade Agreement.”

“In the final scenario, Africa Arisen, technology increases productivity for all and global economic co-operation leads to decisive action to mitigate the adverse effects of climate change and SSA successfully harnesses new technologies to create an emerging, vibrant middle class.”

She underscored the need for African leaders to take proactive mitigation measures to advance their economies such as increasing their export base, enhancing investment in infrastructure development and leverage on technology to accelerate economic growth.

The IMF boss advocated the need for African countries to engage in intra-African trade in order to cushion themselves, and thus commended African leaders for signing the Continental Free Trade Area Agreement as the right step in boosting trade.

She also urged African countries to take proactive measures to mitigate the negative effects of climate change, noting that about 1.5 per cent of the gross domestic product of sub-Sahara Africa would fall if nothing was done about it.

Ms Lagarde urged sub-Saharan African governments to develop deliberate policy measures in education and digital connectivity to harness the benefits of new technologies that would ensure an ‘Africa Arisen’.

According to her, achieving an ‘Africa Arisen’, one of three scenarios of the ‘Future of Work’ in sub-Saharan Africa, would require a well-trained labour force with the right skills, which meant that education would be a key priority.

In addition to upping enrolment, she said they should promote digital literacy and skills that would help the next generation to work with technology.

“Simply increasing enrolment is unlikely to be enough,” she emphasised, saying: “We need to promote digital literacy and identify skills that will allow the next generation to work with and take advantage of technology rather than be replaced by it,” she stated.

Commenting on the Free Senior High School programme being implemented in Ghana, she said the programme could play a pivotal role in improving educational outcomes if implemented in a sustainable way.

Therefore, she said, the second policy area of focus should be the provision of digital infrastructure, especially as digital access fostered innovation in all sectors of the economy.

This, she acknowledged, posed a critical financing need to develop physical, digital and social infrastructure.