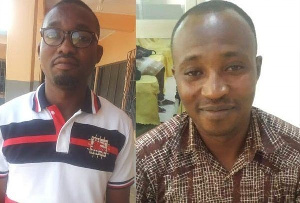 The Bolgatanga Central Constituency Steering Committee of the New Patriotic Party (NPP) in the Upper East Region has suspended two constituency executives for misconduct and a breach of oath of secrecy.

The two executives – Issaka Ibrahim Nsoh, Constituency Communication Officer, and Robert Adongo, Research and Elections Officer – will be on suspension till further notice.

A letter served to the two officers and the regional executives and seen by DAILY GUIDE said the two officers misconducted themselves contrary to Article 3, Clause 7 of the party’s constitution, hence the decision to suspend them till the steering committee decides otherwise.

They failed to use the party structures to address their grievances and chose to speak ill about the party publicly, thereby tarnishing the image of the party and downplaying its structures.

In an interview, the Bolgatanga Central Constituency Secretary said the two officers went round peddling falsehood about a decision that was taken by the executive committee and led an attempt to introduce factionalism into the party at the constituency level, hence the decision to suspend them.

DAILY GUIDE has learnt that the two suspended officers have written letters to apologize for their misconduct and the steering committee is yet to meet over their apology.