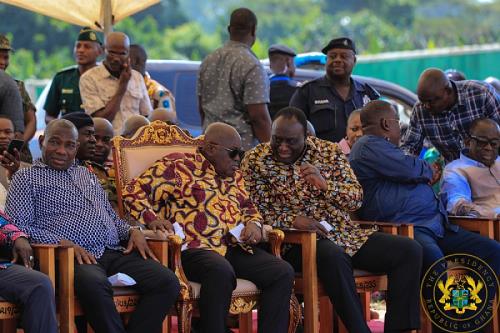 The project, located in the Kade constituency, when in full operation, is expected to employ some 300 people with varied technical skills at the factory, including other unskilled labour.

The factory is also expected to employ some 10,000 workers to work on a 25,000 acre of land to feed the factory whose main products will include laundry soaps, personal wash detergents, refined cooking oil and edible palm oil.

Birim Oil Mills Co. Ltd., according to management, has the capability of expanding its current capacity of 30ton/hr to 60ton/hr, implying that the company has the potential of utilizing the output from 50,000-acre oil palm plantation which can employ about 20,000 people.

Speaking at the inspection, President Akufo-Addo noted that the project will afford existing small holder farmers to increase their cultivation of oil palm, whilst new and prospective commercial farmers would be attracted to undertake plantation development, leading to increased incomes and improved livelihoods for the people in the Kwaebibirem District and its environs.

The Minister for Trade and Industry, Hon. Alan Kyerematen, who also spoke at the function indicated that Government has approved an Incentive Framework specially designed for the 1D1F designated companies.

The Incentives, which include tax holidays, duty waivers, and interest rate subsidy, are designed to help build the capacities and competitiveness of these enterprises, and to position them for greater productivity and efficiency.

He encouraged the Management of Birim Oil Mills Company Limited to take advantage of these incentives available to the One District One Factory companies.

Manso, 33.7km transmission mains from Asene to Akwatia, and 250m3 elevated water tank at Manso, Amantem, No.4 camp and Winneba.