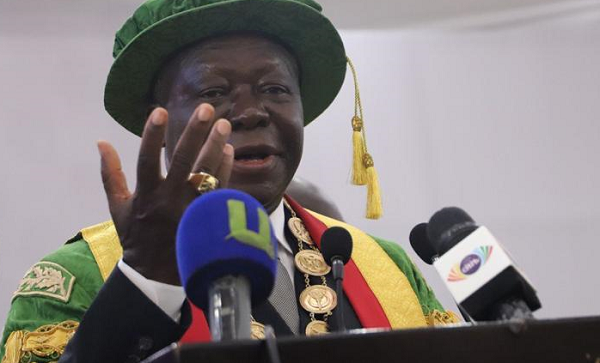 The Asantehene, Otumfuo Osei Tutu II, has called on all labour unions and civil society at large to be measured in their demands on the government.

In the same vein, he has asked the government to ensure equity in its dealings with the labour unions to give assurance to the citizenry.

Speaking at a special congregation of the Kwame Nkrumah University of Science and Technology (KNUST) last Saturday, the Asantehene, who is also the Chancellor of the KNUST,said the government was currently grappling with the effects of the COVID-19 pandemic, while the Russia-Ukraine war was also having an impact on the economy.

“I am not a student of Economics, but I know that resources are always limited and, therefore, we cannot have what we want all the time. I call on the University Teachers Association of Ghana (UTAG) and all other unions on our campuses and civil society at large to be measured in their expectations, particularly at this time when the global economy is battling the deleterious effect of the COVID-19 pandemic and the Russia-Ukraine war.

“Also, as the Good Book says in Luke 10:7, the labourer deserves his wages. I urge the government to continue to ensure that equity is manifestly done and the citizenry fully assured and satisfied,” he stressed.

In all, 4,712 graduated at the special congregation. They included1,652 females.
Five traditional rulers in the Ashanti Region were among the graduands at this year’s KNUST Special Congregation.

The traditional leaders graduated with certificates in Chieftaincy and Traditional Leadership, after two years of studies.

Otumfuo Osei Tutu called for dialogue, goodwill and trust, emphasising that they were essential ingredients in resolving conflicts, and appealed for those qualities to be applied effectively in all future negotiations between labour unions and the government in order to avoid prolonged strikes.

“I hope that dialogue, goodwill and trust, which are essential ingredients in resolving conflict, will be applied in all negotiations between labour unions and the government in order to avoid prolonged strikes,” he said.

Making reference to the almost three-month strike by members of UTAG over their conditions of service, the Otumfuo said while he was not apportioning blame on any party, the strike had further created a dent in the academic calendar, after the COVID-19, and expressed the hope that it would not recur in the future.

That notwithstanding, he commended the government and UTAG for amicably resolving the impasse and restoring normalcy to the various campuses.

“As we are aware, our lecturers laid down their tools earlier in the year, in protest against what they called ‘their worsening conditions of service’,” he recalled.

The Asantehene further expressed excitement over government’s decision to resume construction work on the KNUST Teaching Hospital project, which had been abandoned for over a decade, indicating that the first phase of the project would be completed in October this year.

Mr Fordjour reaffirmed the government’s commitment to support the KNUST to advance its mandate of promoting cutting-edge technology and research to solve Ghana’s development challenges.

Education, he said, was the catalyst for unlocking the developmental potential of every nation, and that that was why the government had embarked on social policy reforms to help push Ghana towards the path of growth.