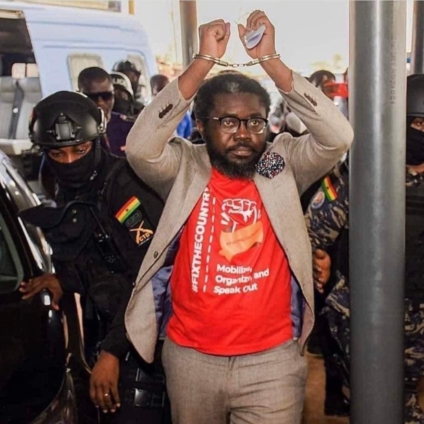 Godfred Dame says he has so far failed to cooperate with police investigations and has no fixed place of abode.

Mr Barker-Vormawor who is said to be unwell has put in an application for bail through his lawyers.

He’s facing the charge of treason felony over allegations he has instigated members of his group to overthrow government.

He has been in the custody of the police since February 11, 2022, when he was arrested at the Kotoka International Airport.

Documents filed in opposition to the bail on behalf of the Attorney-General spells out challenges investigators have faced so far. The A-G says the youth activist has refused to obey a court order requiring that he grants the police access to his mobile phone.

A search warrant is also said to have been granted police investigators to visit the residence of Mr Barker-Vormawor.

The A-G says he has failed to show the police any fixed place of abode within Ghana where he resides.

“That having regard to the nature of the offence and the punishment which conviction will entail, the applicant, a person with no fixed place of abode in Ghana is not likely to appear to stand trial if granted bail” the A-G argued.

The application for bail was to be heard on Thursday, March 10, 2022 but was adjourned as the lawyers for the youth activist said they had just received the documents filed by the A-G’s office.