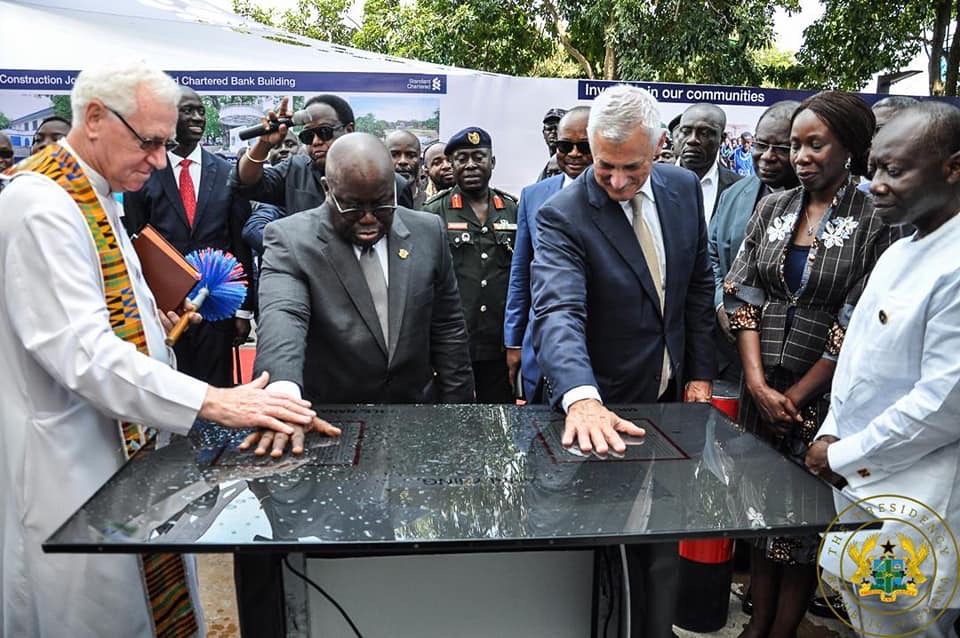 The President Nana Addo Dankwa Akufo-Addo, has revealed that the rationalisation of the banking sector, undertaken by his Government, has ensured that deposits of one million, one hundred and forty-seven thousand, three hundred and sixty-six (1,147,366) Ghanaians were saved.

Speaking at the inauguration ceremony of the new Standard Chartered Head Office on Wednesday, 3rd October, 2018, President Akufo-Addo noted that his administration assumed the reins of office in January 2017, with the country’s banking sector in deep trouble.

According to him, some banks were saddled with high non-performing loans, $2.4 billion energy sector legacy debts, and were also thinly capitalised, and, as such, were unable to underwrite big ticket transactions.

“With time, even more toxic problems emerged, such as systemic widespread abuse, poor, irresponsible governance practices, liquidity challenges, circumvention of banking laws, all with the apparent complicity of some high-ranking officials of the Bank of Ghana,” the President said.

He continued, “There were situations where directors of banks took depositors’ monies, lent those monies to themselves or to their own businesses, and failed to pay back. This led to liquidity challenges and the inability of these banks to pay back when the depositors came calling.”

The President noted that the banks, caught up in these malpractices, became insolvent, and relied on liquidity support from the Bank of Ghana.

What this meant was that, President Akufo-Addo explained, without injection of liquidity from the Bank of Ghana, these were bound to fail and collapse, with depositors losing their entire savings, and all the workers losing their jobs.

“These measures saved not only the deposits of one million, one hundred and forty-seven thousand, three hundred and sixty-six (1,147,366) Ghanaians and their businesses and the people they employed, but also minimised job losses in the banking sector,” he added.

President Akufo-Addo reiterated that the rationalisation and clean-up of the financial sector were necessary to safeguard the health and strength of the economy.

“I have said it before, and let me reiterate, that those responsible for the sequence of activities that led to the ‘crisis’ will face the full brunt of the law, if they are found to have broken the law, and suffer all the consequences prescribed by law,” the President stressed.

Speaking on the role of the banking sector to the progress and prosperity of the country, the President noted that “when banks do not become mere profit-making enterprises, but see themselves as partners with Government actively to build a heathy and stronger economy, then we would be making significant progress.”

He indicated that the perennial problems of the slowdown in credit to the private sector, high bank lending rates, and financial exclusion continue to be matters of great concern to Government and are being addressed.

Firstly, the President noted that the introduction of the National Financial Inclusion and Development Strategy (NFIDS), which is currently before Cabinet, should help increase the penetration of financial services from 58% in 2013 to some 85% by 2023.

Secondly, Government, he added, is working with financial institutions and regulators to promote digital finance, mobile money usage, and formalise the Ghanaian economy.

With mobile money penetration in Ghana being the second in Africa, and, with reforms to our payment system, the President was hopeful that Ghana will have a strong competitive edge in the region for financial innovation and access to credit.

“The introduction of the mobile money interoperability platform, launched in May this year, resulted in GH¢12.5 million worth of transactions within the first month alone. Currently, mobile money transactions are worth GH¢155.8 billion, up from GH¢78.5 billion in December 2016, representing an increase of 98.5%. We are moving our country’s payment systems from being a pre-dominantly cash-based one to an electronic one,” he added.