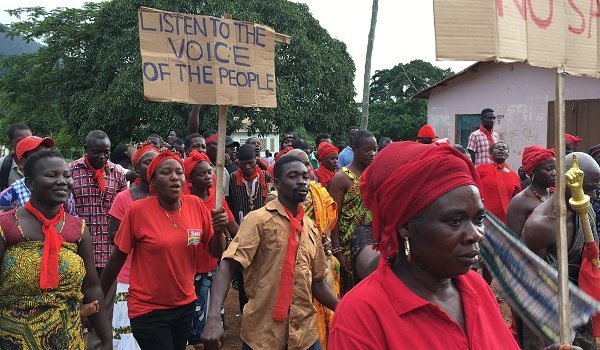 Hundreds of protestors in the Nkoranza Municipality of the newly created Bono East Region on Monday hit the streets of Nkoranza Township to register their protest over what they described as “sidelined of the Nkoranza township as the capital of the new region”.

There is an uneasy calm over the siting of the capital town of the newly created Bono East Region.

Clad in red armbands and head gears, the demonstrators held placards with inscription such as “Dan Botwe you are bias”, “this is elimination by rough tactics”, “Nick Danso Abeam you are our only hope”, and “Nkoranza Traditional Area has the highest votes in the referendum”.

According to the protestors, they did not understand why the Ministry of Regional Re-organisation and Development and the Brong-Ahafo Regional Coordinating Council failed to invite the Nkoranza Traditional Area to several meetings organised in connection with the siting of the capital.

They believed the purported sidelining of Nkoranza was orchestrated by politicians well connected with the creation of Bono East region.

Addressing the protestors at the Nkoranza old lorry station, Nana Okofo Agyapong IV, the Adontenhene of the Nkoranza Traditional Area, commended the government in her bid to create the new regions in the country, which would push development.

But he emphasised that “if the capital of the Bono East region was not located at a place convenient for the chiefs and people of the region, it would have serious consequences on the fortunes of the New Patriotic Party in Election 2020”.

Flanked by other members of the Nkoranza Traditional Area, Nana Agyapong IV regretted that although the issue of the siting of the regional capital was not discussed before the referendum, Osaedeeyo Akumfi Ameyaw II, the Paramount Chief of Techiman Traditional Area made many public statements to the effect that Techiman was going to be selected and named as the regional capital.

This is because the chiefs and people of Techiman touted in social and some traditional media outlets that they initiated the idea of the proposed creation of the Bono East Region.

“It is important to note that 14 paramountcies signed the petition for the creation of the Bono East region. Although all the paramountcies are traditionally equal, Nkoranza paramountcy is the biggest in terms of population, polling stations, and land size” Nana Agyapong IV explained.