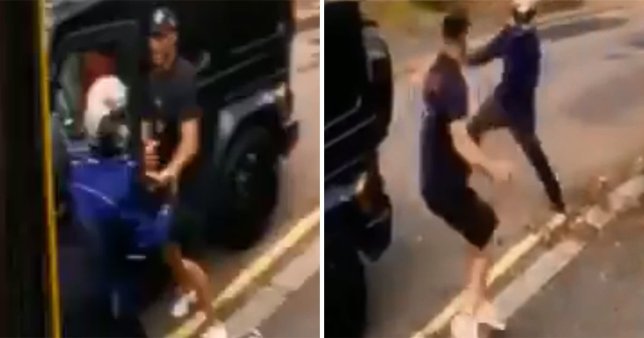 Arsenal defender Sead Kolasinac defended teammate Mesut Ozil with his bare hands against an armed carjacker today. German Midfielder Ozil was ambushed by a moped gang who boxed in his car as he drove through north London.

He darted out of the black Mercedes G Class 4×4 and ran to a nearby restaurant to take cover. Meanwhile Bosnian Kolasinac, 26, jumped from the passenger seat and taking on one of the knife wielding attackers who was wearing a crash helmet.

A witness of the attack near Golders Green Road, north London told MailOnline: ‘Ozil looked absolutely terrified, as anybody would after being chased by men with knives. ‘He looked like he was running for his life. And I suppose he was.

‘They didn’t take off their helmets and were all in black, wearing long sleeved tops in this hot weather. They stood out. ‘God knows what would have happened if they’d caught him. It looked to me like he’d have been hacked to shreds and he clearly thought so too.’ The gang reportedly turned around and fled as soon as staff at Turkish restaurant Likya came to the window. Police blocked off the road while officers scoured the area for the attackers. Neither of the Premier League players were harmed and they did not need to go to hospital.

The pair had only just returned to London the day before the attack after a pre-season tour in the US. A Scotland Yard spokesman said: ‘Police were called to Platts Lane, NW3, shortly before 17.00hrs on Thursday, 25 July to reports of an attempted robbery. ‘It was reported that suspects on motorbikes had attempted to rob a man who was driving a car. ‘The driver, along with his passenger, managed to get away unharmed and travelled to a restaurant in Golders Green, where they were spoken to by officers. There have been no arrests. Enquiries continue.’ A statement from Arsenal said: ‘We have been in contact with both players and they are fine.’