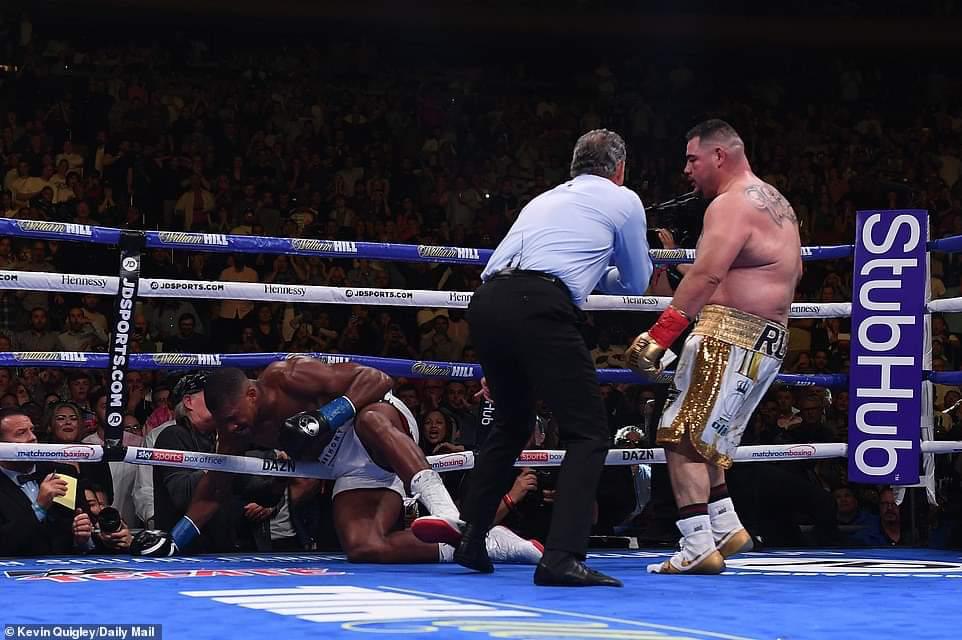 Andy Ruiz Jr produced one of the biggest shocks in the history of heavyweight boxing to rip Anthony Joshua’s IBF, WBO and WBA world heavyweight titles from him and tear up the division’s proposed plot lines.

In a truly remarkable fight at New York’s Madison Square Garden, Ruiz floored Joshua four times en route to a seventh-round stoppage, which stunned this famous arena and handed the Briton his first defeat as a professional.

Joshua was a 1-25 favourite with bookmakers, with 22 wins – 21 by knockout – going into the fight. He will now join the likes of Lennox Lewis and Mike Tyson as dominant champions to suffer losses which brought the sport to a standstill.

“I got beaten by a good fighter,” said 29-year-old Joshua on Sky Sports. “It will be interesting to see how far he goes, but this is all part of the journey.

“He’s a champion for now, I shall return.”

This was no fluke, no punch from the ages, it was the breakdown of a fighter who looked shattered from an early stage.

After flooring Ruiz with a left hook in the third round, Joshua hit the canvas when a right crashed against his temple. By the time a sensational three minutes was up he had been down again thanks to a flurry when cornered.

It created an electric buzz amongst the 19,000 or so in the arena. Just what was happening? Were they going to see the unthinkable? 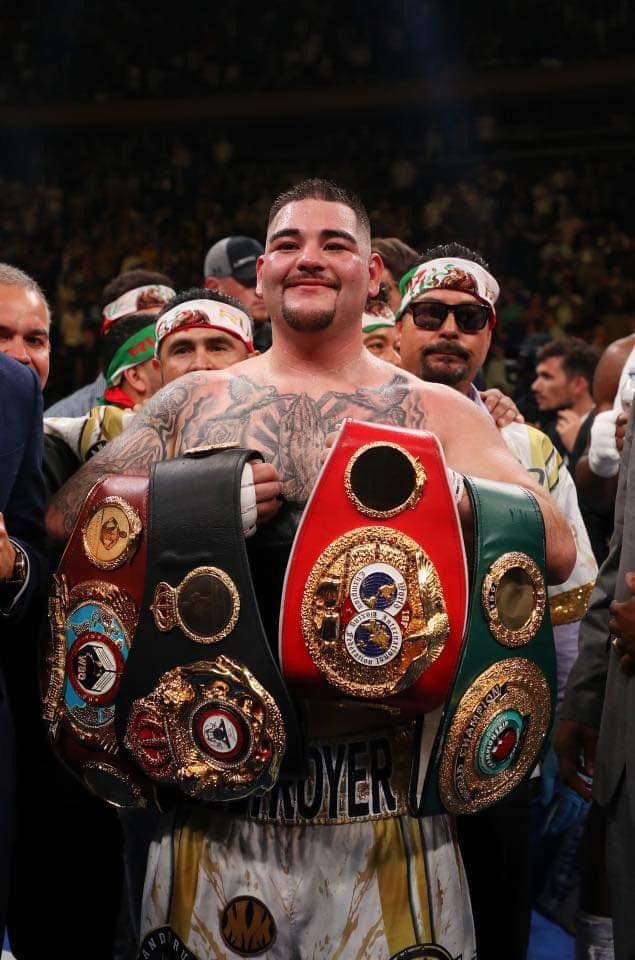 Ruiz, 29, was not even supposed to be here. He took the bout at six weeks’ notice and tickets were being collected by fans 24 hours before the bout which still had the name of Jarrell Miller – Joshua’s original opponent – printed on them.

By the seventh round, when Joshua touched down under a flurry of shots again, the game looked up. Seconds later he was down on all fours again and spat his gum shield out, perhaps to buy time.

He simply did not have it. The bout was waved off and all that was planned for the glamour division was ripped up thanks to a man who had been dubbed unglamorous because of his rounded physique.

Ruiz, from appearance to pedigree, was an underdog in every sense of the word. When Britons wake up on Sunday morning, they will read of a truly iconic upset.

Not the Joshua Britain knows

Ruiz, American born but with Mexican parents, becomes Mexico’s first heavyweight world champion, just as he said he would.

When Joshua sat down with the media on Wednesday, virtually every question directed at him was about his future, not this bout.

He said he was “seeing the bigger picture” and maybe therein lies the problem.

After six fairly tentative minutes from both men he scored his knockdown from a crisp left hook as the pair boxed up close. Normal order appeared set to play out.

Moments later when he himself hit the deck, we were taken back to his titanic struggle with Wladimir Klitschko. The night was on a cliff edge, simply do not blink.

And from that first knock down, he never appeared comfortable. Whether it be stamina, a lack of focus or a lack of preparation for his late stand-in, this was not the Joshua the travelling 8,000 strong army of British fans had grown to know.

In the sixth round there were warning signs. After a smart left hook and right hand combination from Ruiz early on, he went on to take pot shots at Joshua’s head, with the champion seemingly too fatigued to even muster a guard while his legs appeared confused below him.

And then came the finish, mainly built from punch volume as Ruiz overwhelmed his vulnerable opponent with two knock downs in quick succession. The crowd seemed frozen. Surely not? Yes, it was over.

There will be questions because Joshua is his own biggest analyst. For now, there is only disbelief.

Rematch before the year is over

Joshua was down on two cards and up on one when the stoppage came but, according to promoter Eddie Hearn, he will get his chance to rectify things in a rematch in London, in November or December.

“This will devastate him,” said Hearn. “He will come back. It’s now down to the rematch and winning that fight.

“To get back to the heights he has been, he must win that rematch.”

For now, all talk of facing Tyson Fury or WBC champion Deontay Wilder can stop.

Ruiz, who now has 33 wins and one loss can temporarily bask in the glory of his glorious night. He joins James ‘Buster’ Douglas – who humbled Tyson in 1990 – and Hasim Rahman who beat Lewis in 2001 as men to land colossal upsets.

Lewis of course responded by winning a rematch. Ruiz though showed plenty here to suggest Joshua will have to find plenty to do the same.

Ruiz was calm and calculated in staying away from Joshua’s obvious power early on. When he stepped forward he did so with conviction and threw plenty, ensuring he got shots off to justify the risk of making himself vulnerable.

When he did take shots after being floored, he took them and ploughed on gamely.

This bout changed his and his five children’s lives financially. The rematch will do so even more.

“This is what I have been dreaming about and I cannot believe I made my dreams come true,” he said.

“That was my first time getting dropped on the floor but it made me want it even more.”

From starting boxing aged six, to being taunted and doubted because of his weight, he has now come up trumps to deliver the ultimate ‘I told you so’ moment.

He rightly said “the sky is the limit now”, while Joshua will look back on a US bow which was wrecked.

BBC Radio 5 Live boxing pundit Steve Bunce: “Anthony Joshua was a broken man in that seventh round. He spat his gum shield out and went back to the ropes. The referee had no option but to stop the fight.

“Anthony Joshua is not going to be able to get away with saying ‘what a great fight that was – everyone was entertained’.

“That is not good enough.”

Former world heavyweight champion and BBC Radio 5 Live pundit, David Haye: “If Anthony Joshua is as healthy and fit as he says he is, then there is something wrong. He needs something in his camp that he didn’t have.

“I thought it was a fantastic night of boxing and unfortunately the Brit lost his belts, but this is why I love heavyweight boxing because anything can happen on the night.

“His invincibility has gone and he is now just a mere mortal. Now, fighters know they have just got to stick in there against him and keep throwing body shots.”

Former featherweight and super-bantamweight world champion, and Radio 5 Live pundit Carl Frampton: “This is the biggest shock I have ever seen in my whole days in boxing, and it’s live. I liked Eddie Hearn’s honesty by saying Anthony Joshua must win the rematch. Where does he stand if he loses that?”