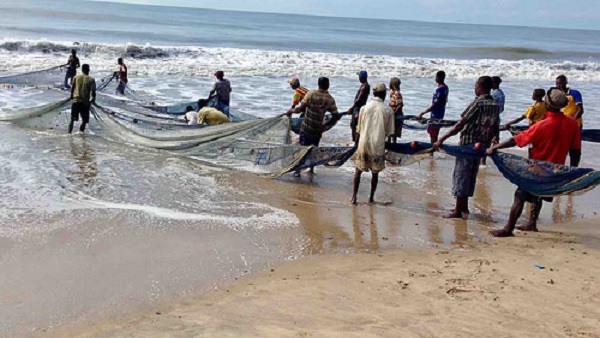 Fishermen at Ankaful in Saltpond were on Wednesday introduced to the use of the latest technological innovation in the fight against the activities of illegal trawlers.

This was during the tutorial on the use of a mobile app, Collect, developed by Far Dwuma Nkɔdo, an NGO, with funding from the European Union as part of the Sustainable Fishing Project.

This online app, which was outdoored in November 2018, and is already being used by fishermen in 10 other fishing communities, will be a means to report sightings of illegal fishing activities, as well as serve as a means of collecting evidence of damage done to fishing boats and other fishing equipment for redress.

It works on the android mobile platform and can be accessed even without a data network, and will upload whatever information the fishermen have while they are on the high seas once they have access to the internet.

When The Finder first interacted with the fishermen, they expressed misgivings about carrying their smartphones with them on their expeditions, as they prefer to use the cheaper (and more expendable) brick phones, locally referred to as “yams”.

Project officer at Far Dwuma Nkɔdo, however, allayed fears that the app will not serve its purpose since the fishermen do not take their smartphones with them when they go fishing.

She said, “We have this [waterproof] pouch which they can place their phones in so that even if it falls into the water, they can pick the phone, without it getting destroyed. So with the pouch, they can still use the phone without stress.”

She was keen to stress that the necessary information which the fishermen should look to capture are the ship names and numbers, to enable the offending vessel to be called back to shore for the necessary sanctions to be taken against it.

She again told The Finder that the app has been designed to medium resolution, thereby enhancing the quality of pictures taken, to enable the fishermen take very good photos which will be useful as evidence when they get to shore.

Kwame Damoah, Zonal Director of the Fisheries Commission, Mfantsiman, urged the fishermen to adopt the new technology, as it was the only way they could get evidence to back any claims they might make. According to him, “Without evidence, it would be hard for government to take the appropriate actions against any person engaging in illegal fishing practices.”

Some of the fishermen The Finder spoke to were optimistic about the use of the new technology.