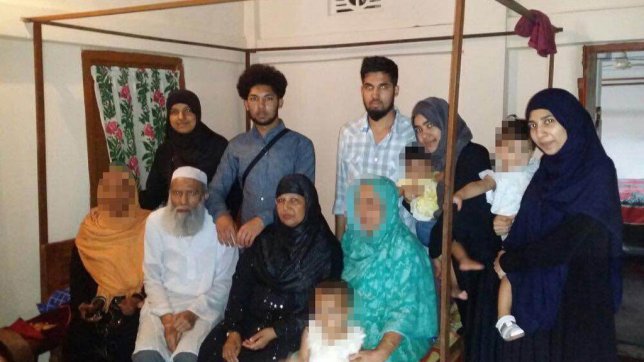 Twelve members of the same family have died after going to join Islamic State, a relative has said. The Mannan family, from Luton, Bedfordshire, are thought to have crossed into the war-torn nation from Turkey soon after leaving the UK in May 25. The father of the family Muhammed, 75, and wife Minera died in Raqqa from health issues, according to the dad’s son from a previous marriage.

He told MailOnline: ‘They are all dead. It’s over, finished. We had been trying to find out for some time what had happened to them and it was only confirmed to us recently from Syria. ‘It’s a tragic end and we have drawn a line under it all and are now trying to get on with our lives.’

Three of the Mannan’s sons, Mohammed Zayd Hussain, 25, Mohammed Toufique Hussain 19, and Mohammed Abil Kashem Saker, 31, were all killed fighting for the terrorist group. It is understood the two youngest both died against in the battle for Raqqa in 2017, while Saker died sometime during the battle for Bagouz, Isis’ final stronghold, earlier this year. Seven other members of the family, including three children between the ages of one and 11, were killed during an airstrike as they tried to flee Baghouz. Named among the dead was the Mannan’s son Mohammed Saleh Hussain, 26, and his wife Roshanara Begum, 24, and their three children aged between one and 11. Their daughter, Rajia Khanom, 21, and daughter-in-law Sheida Khanam, 27, also perished.

Mannan’s cousin Abdul Khalid told MailOnline: ‘From what we’ve been told they were trying to get away from Baghouz and make their way to a camp, like so many other people were trying to do at the time but there was a lot of bombing going on and they got caught up in this. ‘They were all together, that’s all we know. We are not sure if they were in a house or out in the open but the fact is that they are all dead. The details of how they actually died don’t really matter to me.’

Two months after arriving in Syria, the family released a statement declaring their support for Isis and said they were happy to be in a land which was ‘free from the corruption and oppression of man made law and is governed by the shariah. ‘Yes, all 12 of us and why should this number be shocking, when there are thousands and thousands of Muslims from all corners of the world that are crossing over land and sea everyday to come to the Islamic State?’ At 75, Mannan was the oldest Briton to have travelled abroad to join their so-called caliphate and was known to suffer from diabetes. He was also known to be a regular attendee of the Bury Park Mosque in Luton, where his death is already known to some of the congregation.