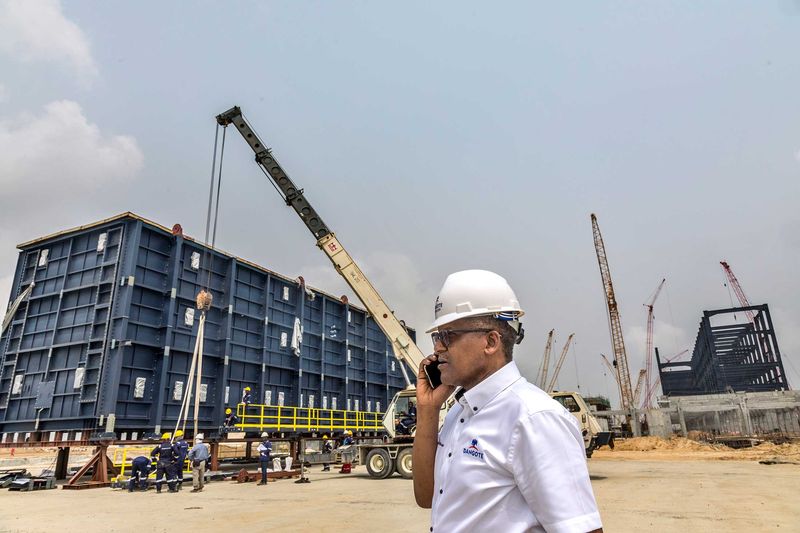 The best way to appreciate the scale of Aliko Dangote’s empire is to hitch a ride on one of his private jets. A half-hour after his Bombardier Challenger 605 takes off from Lagos Airport, it descends into a seemingly desolate area of Kogi State in central Nigeria, dusty fields and clusters of trees stretching to the horizon. Suddenly a tangle of exhaust stacks, silos, and kilns pierces the sky to the left of the aircraft as Dangote Cement Plc’s Obajana plant comes into view. It’s already the biggest in Africa, churning out enough sacks of cement to fill 1,000 trucks a day. A fifth production line now under construction will make it one of the world’s largest.

The cement plant and its two sister factories in Nigeria have long been the bedrock of Dangote’s fortune, Africa’s biggest. But Dangote’s future—and, as he likes to say, that of the entire continent’s economy—lies to the south on the Nigerian coast. About 40 miles east of Lagos, on more than 6,700 acres of former swampland bound by a lagoon and the Atlantic Ocean, contractors are putting the finishing touches on a fertilizer plant valued at $5 billion. Next to it, construction of a vast oil refinery—a $12 billion project—is under way.

If all goes according to plan, the complex will immortalize the 61-year-old Nigerian businessman as Africa’s most prominent industrialist, vaulting Dangote Industries’ annual revenue from $4 billion to about $30 billion, roughly 8 percent of Nigeria’s gross domestic product. Oil industry experts such as London-based CITAC have questioned the project’s timeline, citing logistical and financial challenges. But Dangote insists the refinery, which will be Africa’s largest, is on track. “By 2020 I will finally dispatch oil,” he says during a January interview at his Lagos home.

Despite controlling the world’s 10th-largest oil reserves, Nigeria has only four aging, inefficient state-owned refineries, leaving it almost wholly reliant on imports for its fuel needs. Dangote says his massive refinery could end that dependency and lift electricity generation in a nation plagued by blackouts: “It will change the entire economy of Nigeria.”

The fertilizer plant, which Dangote says will come online in a few months, will be capable of producing up to 2.8 million metric tons of urea a year. “It’s probably the largest-volume urea plant ever executed at one time,” says Alistair Wallace, head of fertilizer research at Argus Media in London. Nigeria’s natural gas prices are the lowest in the world, meaning Dangote’s fertilizer will likely be profitable even in the competitive export market. “It will generate hard currency and bring in dollars. It will be a good look for the administration and for Dangote,” Wallace says.

Born into a wealthy Muslim family of traders in the north, Dangote incorporated his own business selling cement at 21. He shifted to manufacturing the building material in the 1990s, convinced his homeland, the world’s seventh-most-populous country, could meet its own demand for staples. Dangote factories churning out sugar, flour, and salt followed. A vertical integration push gave rise to other businesses, including oil, property management, packaging, and port operations.

Four publicly traded companies under the Dangote Industries umbrella account for about a third of the value of the Nigerian stock exchange. While shares of Dangote Cement tumbled 26 percent in the past year amid a sell-off in emerging markets, the fertilizer plant has helped boost Dangote’s net worth to $17  billion, according to the Bloomberg Billionaires Index. (No value is attributed to the refinery in Bloomberg’s analysis because it’s still under construction.)

In many ways, Dangote’s ascent recalls that of Gilded Age tycoons such as Andrew Carnegie and Cornelius Vanderbilt, who accumulated great fortunes as they created industries. While the emergence of a new generation of business titans that includes Amazon.com’s Jeff Bezos and Facebook’s Mark Zuckerberg has drawn attention to rising income inequality in the U.S. and elsewhere, Dangote’s net worth is particularly disproportionate to the lot of ordinary Nigerians, almost half of whom live in extreme poverty.

Critics have attacked him for holding much of his wealth offshore and say he’s a shrewd monopolist who has plied his political connections to secure an advantage over competitors. They claim his market-dominating cement company squeezes local consumers with prices three times the global average while slashing prices in neighboring markets to crush rivals. A World Bank report published in 2016 found that African cement prices averaged $9.57 per 50-kilogram bag, compared with $3.38 globally. Dangote’s cement business has also been accused of exploiting a government-run investment promotion program to secure generous tax breaks.

Dangote shrugs off such criticism, while preaching the gospel of markets as the best way to narrow the divide between the haves and have-nots. “China in 30 years has taken almost 500 million people out of poverty,” he says.

Soft-spoken and unfailingly polite, he offers up his chair in meetings to guests and serves food for others during a lunch in an office conference room. But the courteous chief executive officer is also a hard-driving manager. “ ‘Not possible’ aren’t words he understands,” says Giuseppe Surace, chief operating officer of the refinery project, as our convoy of Toyota Land Cruisers sets off on a four-hour tour of the site. “In his own way, he is very tough.”

Nigeria’s $376 billion economy is, by some measures, Africa’s largest, but the operational challenges for companies are also outsize. The World Bank assigns the country a lowly score of 53 on ease of doing business (Kenya gets a 70, and South Africa a 66). Besides an overabundance of red tape and weak protections for investors, the country is perceived to be more corrupt than many of its neighbors. Nigeria’s chronic logistical logjams, infrastructure failings, and political risk are why CITAC says Dangote’s 2020 timeline for the refinery may not be feasible.

Even the so-called smart money has stumbled here. Five years after pledging to invest $5 billion in infrastructure alongside Dangote, Blackstone Group LP is in the process of exiting an African subsidiary called Black Rhino Group because of a dearth of suitable opportunities, a person familiar with the matter has said. KKR & Co. disbanded its Africa deal team in 2017.

Dangote, for his part, has decades of experience negotiating Africa’s pitfalls. Yet even by the continent’s standards, the refinery project could be characterized as a heavy lift. Dangote Industries bought the plot for $100 million at the end of 2013, but it ultimately took almost three years—and many truckloads of sand—to prepare the swampy ground for construction. The company erected a jetty and widened and reinforced roads to accommodate shipments of cranes and other equipment.

Dangote’s existing empire gives him advantages. The new refinery is a big customer of Dangote Cement, and the roads to and from the surrounding quarries are clogged with his trucks. Also, his timing was fortuitous. The project geared up during a recession, giving him more bargaining power over contractors keen to land work. Plus its location inside a free-trade zone means the complex should be better insulated from the Nigerian political scene, according to Dangote’s lieutenants. “We’re an island,” says Surace, an Italian who previously worked at oil services company Saipem.

Talk to ordinary Nigerians and plenty crack smiles at the mention of Dangote, who’s featured in internet memes, while a recent single by Nigerian singer Teni plays on his wealth. It’s the kind of name recognition any politician would envy. Results from Nigeria’s Feb. 23 general election, which was marred by delays, technical glitches, and violence that killed at least 39 people, saw President Muhammadu Buhari beat his main challenger, Atiku Abubakar. But Dangote, who’s long avoided playing political favorites and deflected questions on the election throughout the campaign, says he’s not interested in governing. “If I exit from business and go into politics, nobody can actually sit in Dangote Group and take the kind of risk that I can, because I’m the owner,” he says. “My real job is to see how do I transform Nigeria and Africa and to take this kind of risk.”

While Dangote has confined his business activities to Africa so far, he expects to expand beyond his home continent after revenue tops $30 billion. There’s not “capacity to be able to invest that kind of money just in Africa,” he says.

Signs of his burgeoning fortune abound. His namesake foundation spends as much as $100 million a year on projects such as hospitals and malnutrition, according to its CEO Zouera Youssoufou. Dangote’s offices feature photos of him with Bill Gates and Barack Obama, and he says he’s in the process of setting up a family office that will have outposts in London and New York. Carlyle Group’s David Rubenstein is helping set it up and the unit will invest alongside the private equity firm, Dangote said. Rubenstein, who hosts a show on Bloomberg Television, declined to comment.

He could even acquire that archetypal billionaire trinket: a professional sports team.

An Arsenal fan, Dangote says he’s prepared to stomach the multibillion-dollar price tag the English soccer club would command once the refinery is finished.

“I will go aggressively after Arsenal,” he says.

For now, though, his focus is on the vast project taking shape on the Atlantic coast.

The last time I see Dangote, it’s past midnight at his Lagos home. He’s sitting at the head of the dining room table, near a barely touched bowl of fish stew and a chunky Casio calculator. He turns his head, with closely cropped hair flecked with gray, toward the accounts in front of him.

He’s absorbed. Seconds tick by in silence, then minutes. Finally he’s satisfied. He signs off and—ever the host—patiently fields a few more questions before seeing me and his other guests out before heading to bed.

Waiting for my ride, I turn back and see Dangote, the $17 billion man, climbing the stairs.

He’s back on the phone, still working.

—With assistance from Paul Wallace