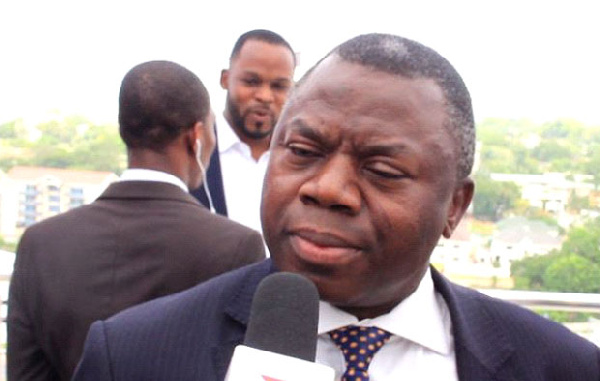 The Chief Executive Officer of Stanbic Bank, Mr Alhassan Andani, has described as ‘exciting’ the opportunity he will be presented with today to be the Guest Editor of the Daily Graphic.

As part of the activities to mark the 70th anniversary of the Graphic Communications Group Limited and its flagship brand, the company is rolling out special programmes such as the hosting of Guest Editors and “I will tell my story”, to afford its various stakeholders, a chance to observe closely, how the newsroom operates.

Mr Andani, who is also the President of the Ghana Association of Bankers (GAB), will be the first Guest Editor and takes his turn in the editorial production of the paper today.

Many other high-profile personalities have also been pencilled as Guest Editors for the 70th milestone celebration which will climax in October, this year.

He will also be expected to share his thoughts on varied issues, most of which will focus on his industry and profession.

In an interview with the Daily Graphic, Mr Andani said he was looking forward to the day as it would be his first time of being part of any editorial team.

“When I was told about it, I was initially not sure what my role was going to be, but after being well briefed, I’m very much excited and look forward to it.

“It is the first time I will be on the seat as ‘Guest Editor’. It is interesting that today I will be swapping roles from being a newsmaker to being the one to help decide which news is worth being on the front and all that. It sounds really exciting,” Mr Andani said in an interview.

The Editor of the Daily Graphic, Mr Kobby Asmah, also said the Editorial team looked forward to having Mr Andani in the newsroom.

“We look forward to having the Guest Editor to work. We believe it will be beneficial to both sides as we get to tap into his experience as he gives us fresh perspectives into the business of newspaper production.

“He, on the other hand, will have at first-hand, the opportunity to be part of the process of news production from start to finish,” the Editor said.

Mr Andani is an economist and an alumnus of the University of Ghana. He holds a Bachelor of Science degree in Agricultural Economics and a Master’s degree in Banking and Finance from Fin Africa Institute in Milan.

Mr Andani is also an alumnus of the Oxford Strategic Leadership Programme and holds an International Management Certificate from INSEAD, Chartered Bank.

He began his career at the then SSB Bank Limited in 1984, and rose through the ranks to become the Regional Project Manager in the then Upper Region in 1987.

He was also appointed by Gold Fields Limited as an independent non-executive director to its Board of Directors on August 1, 2016.