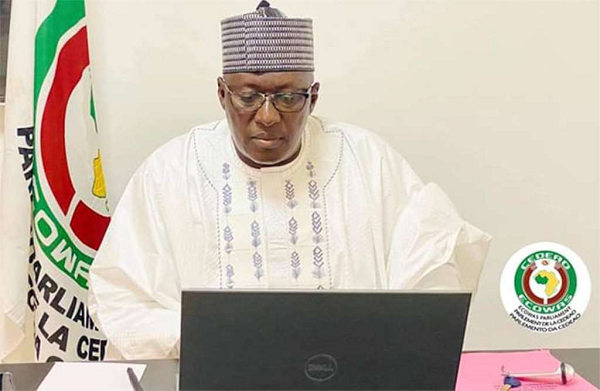 He said the appointment was based on the firm support the ECOWAS Parliament had been receiving from President Akufo-Addo who is the current Chairman of the ECOWAS Authority of Heads of State and Government.

He also announced the appointment of two other key personalities who would join forces with President Akufo-Addo to spearhead a roadmap for the direct election of members to the ECOWAS Parliament.

They are the former President of the Republic of Niger and a former Chair of the ECOWAS Authority of Heads of State, Mahamadou Issoufou, who will serve as the Chief Advocate, as well as a former President of the ECOWAS Commission and the former Special Representative of the Secretary-General and Head of the United Nations Office for West Africa, Dr Mohamed Ibn Chambas, as Assistant Chief Advocate.

“We are convinced that we are on the right track. We also believe that with the advocacy coming from His Excellency Issoufou Mahammadou and His Excellency Dr Ibn Chambas, combined with Your Excellency as the Champion, our objective is as good as achieved,” he said.

Addressing the opening ceremony of the Extraordinary Session of the Fifth ECOWAS Parliament in Winneba today, Dr Tunis said he was also personally committed towards making the direct election of members to the ECOWAS Parliament as one of the most enduring democratic legacies of the Parliament.

The four-day meeting, which is on the theme “Two decades of democratic elections in ECOWAS member states: Achievements, challenges and the way forward”, is the first of such meetings to be held outside of a capital of any member state.

It has brought together 115 legislators from the 15 member countries who will take an appraisal of electoral systems in member states, identify challenges and put forward proposals for possible solutions to the various shortcomings observed in the organisation of elections and other threats to democracy in the region.

They will also identify the deficiencies and good practices for conducting elections in member states within the context of existing legal, institutional and material frameworks, and make recommendations for improving elections within the bloc.

Making reference to Article 18, Dr Tunis said one of the cardinal objectives of the ECOWAS Parliament under the current leadership was the election of members into the Parliament by direct universal suffrage.

He said the ECOWAS Parliament was able to initiate the process last year despite restrictions and difficulties associated with executing normal activities occasioned by the COVID-19 pandemic.

He expressed appreciations to President Akufo-Addo for demonstrating dedicated and exemplary distinction and quality performance as the Chair of the Authority of Heads of State.

“His Excellency has brought great pride both to himself, his country Ghana, and the African continent. We are proud of him, and his achievement as a statesman, a leader and democrat.

“Since assuming his role as Chair of the Authority, His Excellency has diligently supported the works of the Parliament and has exercised excellent leadership in handling the affairs of the region,” he said.