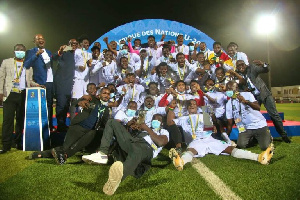 President Nana Addo Dankwa Akufo-Addo has congratulated the national U-20 men’s soccer team for their title-winning performance at the just-ended U-20 Africa Cup of Nations.

The Black Satellites on Saturday, March 6, when Ghana was marking its 64th independence anniversary, beat Uganda 2-0 to win the 16th edition of the tournament held in Mauritania.

President Akufo-Addo admitted that the team has made Ghana proud. He tweeted on Sunday.