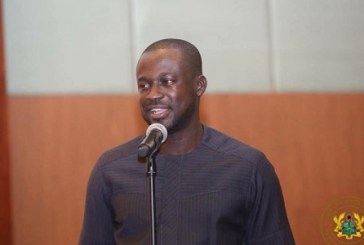 Mr. Sam George has asserted that the president tweeted his admiration for the now declared fugitive Menzgold boss after NAM1 and former GFA boss Kwesi Nyantakyi called on him at the presidency last year.

But Mr. Arhin in a message to Randy Abbey, host of Good Morning Ghana on Metro Television where Mr. Sam George made the claim, rubbished the claims, describing the said tweet as a fake one that did not emanate or originate from the president.

‘’I want to put on record that NEVER has the President’s twitter handle been used to do that. That supposed tweet is a fake and I’m daring Hon. Sam George to prove that indeed that has been done. President Akufo-Addo never had a one-on-one meeting with NAM1 on the 25th of April 2018’’ he said.

Mr. Arhin continued ‘’On that day, GFA officials and CAF officials, including its President Ahmad Ahmad, paid a courtesy call on President Akufo-Addo, ahead of the conferment of an honorary doctorate degree by the University of Professional Studies. The then GFA President, Kwasi Nyantekyi, only brought NAM1 to the meeting because 4 days earlier, on 21st April, Zylofon had indicated its decision to sponsor the Ghana Premier League. Never on that day did the President have a one-on-one meeting with NAM1 and never on that day did he post that fake tweet being forcefully trumpeted by Sam George’’.