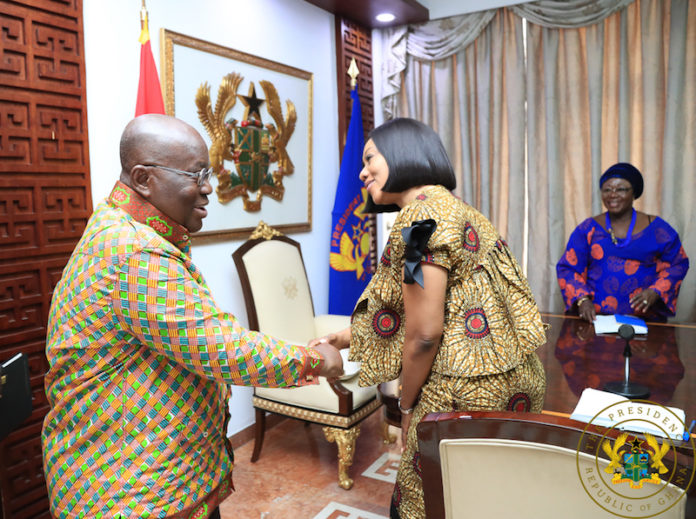 Mrs Mensa who has been in charge of the commission since August 2018, claimed the presidency has never dictated to the commission on how to execute its mandate, stating they have enjoyed full independence to operate.

“It’s important to emphasise that since our appointment one year ago, we’ve not received a call from the office of the president directing us to do our work,” the EC chair stated Thursday when she called on Nana Akufo-Addo to account for her stewardship.

The commission, she noted, values the independence being enjoyed under President Akufo-Addo, indicating it goes to demonstrate the president’s “belief for the rule of law and institutions”.

For this, she said, “we are here this morning to express our gratitude to you”.

The EC chair who was accompanied by other commissioners said they “value the independence and the confidence” that the president reposed in them a year ago, and promised to deliver their mandate to the best of their capabilities.

“…We’ve been doing our best to ensure that the ideals and the mandate you gave to us is achieved,” Mrs Mensa told the president at the Jubilee House.

Mrs Mensa said the commission is ultimately interested in ensuring a fair and credible EC to carry out its mandate in a fair, free and peaceful atmosphere.

She expressed appreciation to the president for his support to the commission, something she noted, has ensured the release of funds to the EC for “smooth” operations.

“Without his support” she said, “it would be difficult to do our work”.

Meanwhile, Nana Akufo-Addo has stated he does not need the support of the EC to win election, suggesting he will be contesting for a second term in 2020 on the ticket of the New Patriotic Party.

He commended the EC for the work done so far, stating he is satisfied with the Commission’s work and pledged government’s support in making the ongoing reforms successful.

“I think all the decisions you are making to enhance capacity and bring some level of quality to the internal administration and management of the Electoral Commission itself should be welcomed by all right-thinking people in our country,” the president observed.