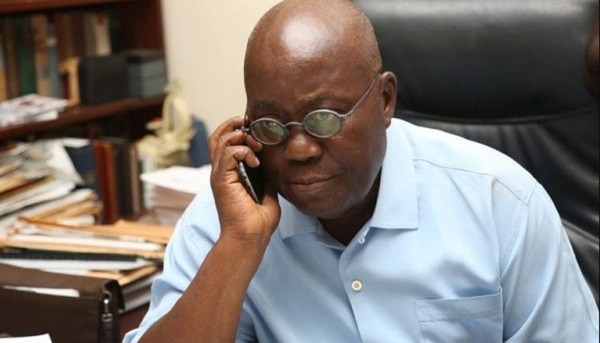 President Akufo-Addo has personally phoned the four families whose relatives were kidnapped and now confirmed dead to console them following a report from the police administration.

Father of Priscilla Mantsebeah Koranchie the last girl to be kidnapped on December 21, 2018, Alexander Kojo Koranchie told to Empire News’ Emmanuel Ohene-Gyan that the President personally called him to console him and said I will “hear from him later”.

“I was surprised that the President called though belated, he is the father of the nation and I cannot begrudge, I wish his call will have come earlier than this but all the same I am happy he called and God knows best,” downhearted Mr. Koranchie revealed.

The acting Inspector General of Police, James Oppong Boanuh, on Monday confirmed that results of DNA tests conducted on some human parts exhumed in a house in Takoradi are that of the four missing girls.

A special police operation led to the discovery and exhumation of the bodies of the four missing Takoradi girls at Kansawrodo in the Sekondi Takoradi of the Western region, Starr News confirmed in August this year.

Mr. Koranchie further told Ohene-Gyan he accepts the results announced by the police after the DNA test.

“I don’t know if the police will release the remains of Priscilla Mantsebeah Koranchie to us for burial”.

The bodies were retrieved from a manhole in the house of the suspect Samuel Udotek Wills.

The whereabouts of three of the missing Takoradi girls – Ruthlove Quayson, Priscilla Blessing Bentum, and Priscilla Koranchie – who were kidnapped between August and December 2018 had become a mystery for several months.